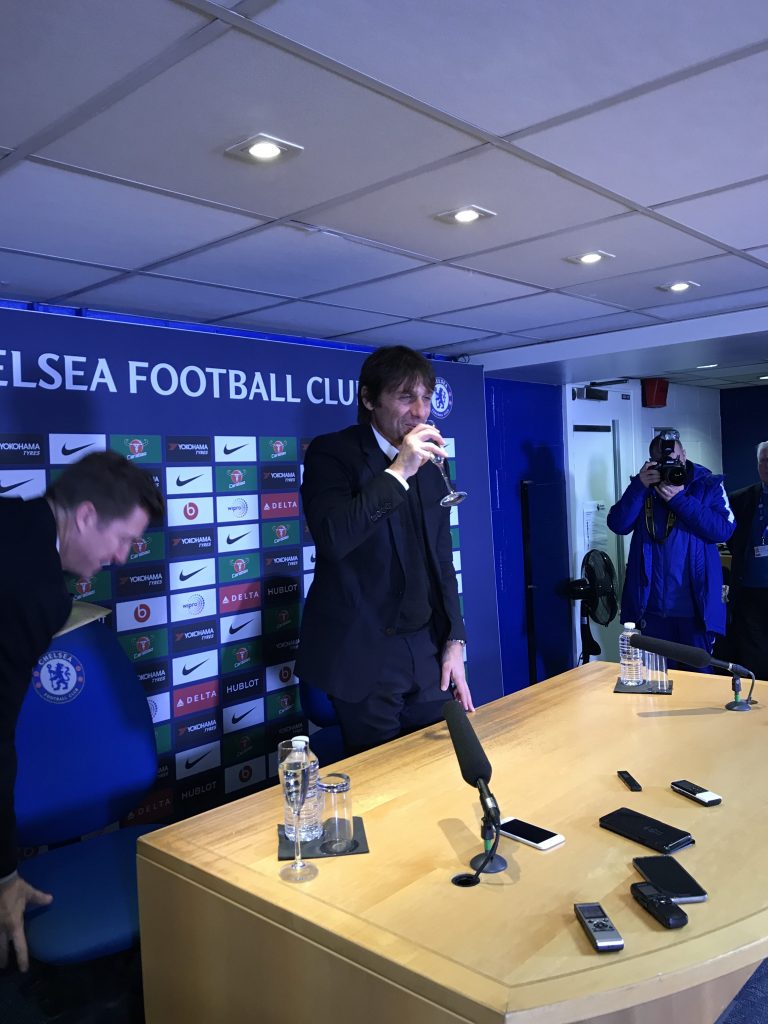 Antonio Conte raised a glass of prosecco to wish everyone in the press room a Merry Christmas and was generally in a good mood after seeing his charges overcome a dogged defensive Brighton 2-0 at Stamford Bridge this afternoon.
Conte is fond of a statistic and started to explain the game in such term: “We shot 25 times, eight on target, 13 corners, a lot of possession,” he said.
“I think today we dominated the game in the same way as at Everton (Chelsea drew 0-0 at Goodison Park on Saturday).
“The difference today, in the second half was we scored.
“We scored twice. We had many chances to improve the final result but I think I saw good intensity, great commitment of my players. We wanted to win this game. I think it’s very important for us to start the second half of the season with a win. We are doing a good job, but we have to continue in this way.”
Conte is generally happy with his side’s overall performance in defence of his title – despite sitting third, with Manchester City way out in front.
“I think in this league there is a great motivation for all,” he said.
“To try, I repeat, to stay there and to fight until he end, I don’t know if it will win the title. It depends upon Manchester City. They are doing something extraordinary to win every game and draw only once up to now.
“That means you’re having a fantastic run. Otherwise, Chelsea, United, Tottenham, Arsenal and Liverpool would be staying there to fight. We fight for a place in the Champions League next season.
“There are four places for six top teams. Last season, Manchester United and Arsenal finished fifth and sixth.
“There is this great motivation for me, for the players, and we want to try and improve. Our start wasn’t easy this season, for many reasons. But we want to work and improve. There are many competitions. It’s important to face every competition and be very proud to play every game.”
Alvaro Morata opened the scoring with a header and Conte is happy with his performance.
“Today it was positive to score for Alvaro. He’s our No9. Against Everton, he didn’t play as he was ill. Also Alonso, to score five goals up to now, for a wing-back, is a great achievement. But it’s important to continue. Not to stop scoring. We need this alternative from our striker and our No10. But we must be pleased with all my players.
The commitment of my players was great. I was very happy, also, after the game against Everton with our performance, but we didn’t win against Everton. Today we scored. If we learn to be more clinical, and to try to exploit the many chances we have during games, it will be better for us.”
The Christmas period is traditionally a hard one with many games, but for some of the Chelsea side, it’s their first experience of it.
“For Morata, for Bakayoko, for Rudiger… it’s the first time they’ve played during the Christmas period, and it’s not simple,” said Conte.

“But this atmosphere is great. It’s great to play in this atmosphere with your family: you have your parents, your children, your brothers who come and watch the games. It’s right. It’s a busy period for us, but this period started from November and will continue through January and February.”
Morata is benefiting from the assist provided by Cesar Azpilicueta – the Spain striker has hit six goals from the partnership this season.
“Yeah, but Azpi has to score also,” laughed Conte.
”As you know very well, Azpi is a defender with good feet. There is this great link between him and Alvaro. This wasn’t the first time. I hope it continues in this way because we need his assists and Morata to score. Morata has to pay not one dinner but more dinners to Azpi. And, if they invite me, I want to go.”
Speculation in Italy is that Conte is looking to add striker Arturo Vidal to the Chelsea squad – typically Conte tried to bat it away.
“I must be honest, it’s not right to talk about a player of another team. Especially if you try to link this player with us. Arturo is a fantastic player. I have a great respect for Arturo, and we spent many years in Juventus together. I’d always want him with me.”
Does having a relatively small squad slow him to rotate his team as much as he would like?
“I think we have just started this path because, this season, we wanted to improve our squad on a numerical aspect, and also improve the quality of the team. At the same time, to play in this country and face four competitions, it’s very important to have many players in your squad, to have a basis of at least 18 players who are very strong, and then try to make the rotation.
“It’s very difficult for players to play every three days. I think that to have this type of rotation, you have to work a lot.
“Today, for example, David Luiz was out through injury and then, at the last moment, Andreas Christensen was sick. I had to find a solution to play with Cahill for the first time in the middle with Rudiger and Azpi. That means that, behind, you have a lot of work otherwise you risk a lot to change your players.”