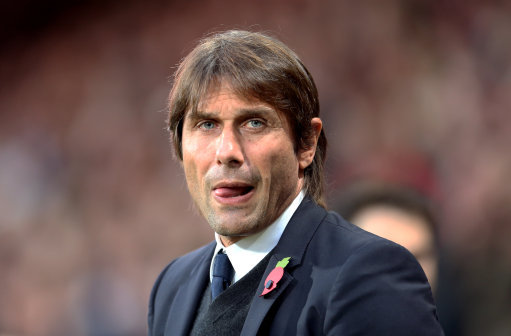 Antonio Conte is keen to defuse any potential issues surrounding the Blues’s Champions League match, on Tuesday against Roma – in particular regarding ex-Roma defender Antonio Rudiger.
Roma were fined by UEFA following the Champions League fixture earlier this month at Stamford Bridge after their fans hurled racist insults at German international Rudiger.
Conte hopes nothing of the sort will repeat itself.
He said: No, I don’t know. I think that Roma supporters are very passionate. Yeah in this case I think that Rudiger played for Roma for many years, and I think they will clap him. I repeat Roma fans are very passionate and during the game you feel this.”
Conte admits he has had mixed results at the national Stadium, as a player and manager

“First of all, we know that this game will be tough,” he said. “In the first game that we played at home, I think, at the end, it was a good result, but for sure, I like to play better, and then yeah, we try to do this in the game against Roma.
“As a player, yeah, sometimes I won, sometimes I lost there, as coach it happens the same – yeah because Roma is a strong team, one of the best in Italy. To play against them is not easy.”
While it may not be easy to play Roma, he and his players will not be particularly phased by playing there either.
“No, don’t forget we played against Atlético Madrid and we have players with experience, that plays in this type of situation. But we want to try and play better than the first game where we drew 3-3.”
Conte is quite upbeat about England’s future prospects based on the current crop of youngsters many of them from the club’s academy who have featured in World and European Cup finals in recent months.
“To win the World Cup with the national U-17 means that you are working very well,” said the former Italian national coach.
“And I think football in England is growing in an incredible way as this is not the only result of the young players, because U19 and u20 and U21 play really a really good European cup, it means that in England, football is growing a lot, improving a lot, and I’m sure that in the future, that the England and national team, the first team, will be very difficult to beat.
“Yeah, want to tell this as I was the coach of the Italy national team, and when you have this movement behind you, it means you can have a great possibility to have a strong team for the next World Cup.
“I’m very happy for our five players, yeah, sometimes, (Callum Hudson-) Adoi came with us. And then against Everton (Ethan) Ampadu he’s only 17 years old (although he’s Welsh)
“Don’t forget that my first appearance in my career in Series A was when I was only 16 years old. I think that I am the best person to give this type of possibility if I see that a young player deserve it.
“I repeat, in my experience at Juventus and (Paul) Pogba, was only 18 years old and then after one month, he played from the start. I want to give this possibility, but you have to deserve it. Ampadu for example, is another player – not England, but at 17, but he deserves to stay with us, and then develop and to be the future for Chelsea.”
Of the game against Bournemouth on Saturday which the Blues won 1-0 thanks to a Eden Hazard strike Conte said: “I think we played a good football. We created many chances to score in first half. But I think we must be more clinical and kill the game.
“To keep the game in balance you risk a draw. In the last minute, we conceded a shot but Thibaut (Courtois) made a good save.
“We played better than last season when we won 3-1, honestly, we suffered a lot then. On Saturday, we played with maturity and created chances and we deserved to win against a really good team. Because Bournemouth are well organised, with a good coach who plays good football. I like to watch this kind of football.”
After Roma, the Blues face Manchester United at the weekend – a tough ask to win both games.
“Four sure, we will try to do this,” he said. “It wont be easy, but first of all, we have to go, game by game and now the more important game is the Roma game and the Champions league. And then, after this game we will start to think about Manchester United.”