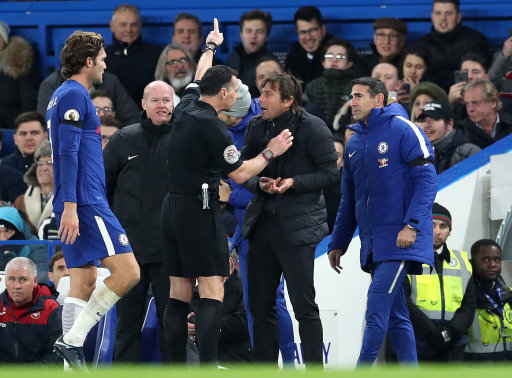 Antonio Conte was sent to the stands as the Blues started the festive period of matches with a lacklustre display against Swansea City that yielded the three points thanks to Antonio Rudiger’s second half header, but gave the 451, 365 fans nothing else to cheer about.
Conte expressed his frustration at his team’s insipid performance by lashing out at 4th official Lee Mason three minutes before half-time.
Referee Neil Swarbrick made an error in awarding a goal-kick to Swansea rather than a deserved corner.
Conte then exploded with a tirade of high volume commentary into the face of Mason.
The official decided to report him to Swarbrick who promptly dismissed the Italian from the dugout.
Conte attempted to stay within earshot of his players by sitting behind his bench, but was then told to vacate further into the bowels of the East Stand.

The Blues had a reasonable shout for a penalty after 20 seconds when Mike van der Hoorn appeared to touch the ball from Pedro’s shot, but referee Neil Swarbrick ignored the appeal.
Willian almost scored from a trademark curling free kick after 11 minutes. While the ball touched the hair of Marcos Alonso, the ball, inched just the wrong side of the nSwansea goal.
Davide Zappacosta was next to threaten the visitors’ goal, but his left-footed daisy-cutter from just outside the penalty area was easily aged by Lukasz Fabianski.
Pedro added another shot on 19 minutes together list as the Swans dug in deep to halt the early Blue onslaught.
Pedro and then Alvaro Morata produced goal-bounds efforts. But both lack the necessary pace to worry the ex-Arsenal goalkeeper.
A brilliant opportunistic volley by Morata had the necessary pace but was directed straight to Fabianski who tipped then ball over the crossbar.
An Alonso near post header from a Cesc Fabregas corner jay ur flashed past the post as the Blues grew increasingly frustrated at the black of outcome from all their possession.
After Swarbrick made an error three minutes from time in not awarding a corner, Head Coach Antonio Conte blasted the fourth official Lee Mason for the error.
Mason decided the words were sufficient to alert Swarbrick who raced to the dugout and then sent Colette to the stands.
Assistant first team coach Angelo Alessio took on the Conte role, but somewhat quieter.
Swansea boss paul client replaced Renato Sanchez for Leroy Fer at half-time, Conte kept the same 11.

The same pattern of play reared its ugly head – with total domination of possession yielding nothing, Pedro slashed a left-footer high into the Matthew Harding stand on 54 minutes.
Eventually pressure told and Antonio Rudiger did what Morata and co failed to do and took advantage of a wicked deflection off a N’Golo Kante shot and headers smartly past Fabianski.
Seconds before that, Conte, somewhere in the stands was instructing Alessio to bring on Victor Moses. The goal changed that and the wing-back already changed and ready to get on the pic the was told to put his tracksuit back on and sit down in the dugout again.
Fabianski kept up his good night’s work by denying Alonso once again as the confidence flowed from the Blues.
Fabianski then tipped over a powerful Morata header.
Moses finally entered the frail 74 minutes for ineffectual Zappacosta.
Eden Hazard and Danny Drinkwater soon with 10 minutes left at the expense of Pedro and Willian.
This had the effect of producing an even worse performance by the Blues and they were relived when the referee blew the whistle.
Next up for Chelsea is the early kick-off=, on Saturday, at home against Newcastle United.