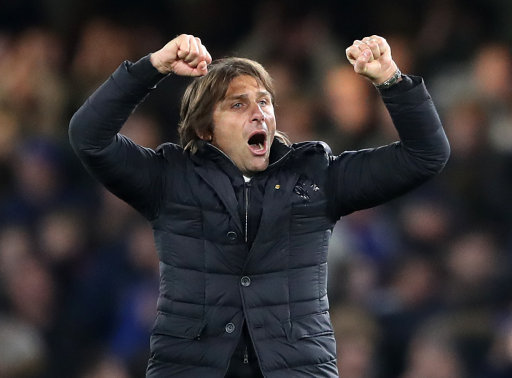 Antonio Conte was understandably delighted to see his charges beat Manchester United 1-0 this evening at Stamford Bridge – Alvaro Morata’s clinical header the decisive difference between the two sides.
The Italian said: “We played with good energy, and passion. I think I saw a lot of positive things. They need to fight and help each other. When we play like this, it is great.
Last season we won the title and showed fantastic spirt and enthusiasm.
“We started this season with a lot of problems. When we have them we must pay attention as the confidence can go down.“
Those problems, Conte suggest is about the midfield composition.
Conte said: “To play with these three midfielders I think it was very important to recover Kante and to play Bakayoko and Fabregas and have substitutions like Drinkwater on the bench.
“This season, we struggled a bit to find the best solution for this team. Last season we found a great balance with a 3, 4, 2 1 formation.
“This season we changed many players and I think we have to find the best solution, game by game. Against United we created many chances to score, but could have been more clinical.
Conte suggested that he has to make tough decisions and one of those was dropping David Luiz from the match day squad.

“It’s very simply,” said Conte. “The coach has to do what’s best for fo the team. Against United the best was to play with Christiansen and have Ampadu on the beach and other young players, telly good players for the present and the future. I must make the best decision for the club, not a single player. I can make mistakes. Luiz was dropped only for a tactical decision. It’s normal, it can happen to anyone of my players. If they are not in a good form. In every situation, I have to put in my face and then sometimes to make important decision. I did this. Christensen played an amazing game. I was happy.”
Once again Conte referenced the lack of players in his squad.
“I think i have a squad with 16 senior players and five young players,” he said. “I have to make best decision for the team.”
Chelsea beat United thanks to a gol by Alvaro Morata – Conte thinks there is much room for improvement in his striker.
“Don’t forget, when we talk about him, this is the first season where he plays regularly. Previously he did not play regularly.
“Now he has to work, improve. Before his injury he was playing in a fantastic way. Then after injury against Man City, his form dropped. It wasn’t good enough. But he played well against three very strong United centre backs. He is strong and has good technique. If I have to find a negative, it’s that he can score more goals, be more clinical and kill the game.”
The desire to lower the average age of the squad while also retaining a stake in the league title and Champions League is probably makes this Conte’s toughest challenge as a coach
“Our average age is lower than last season,” he said. “Many players are 22 or 24. It means we must have patience with them.”