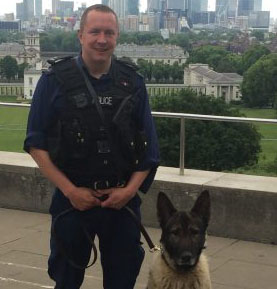 Neil Dobson was on a routine job on Friday, May 18 at around midnight with his police dog Monty, when he was alerted to a black of flats on fire in London Road.

After seeing thick black smoke PC Dobson tied up Monty outside and, with no thought for his own safety, rushed into the building and to the residents’ aid, where many were asleep.

On entering the building PC Dodson found that most of the space was already filled with smoke, making visibility and movement difficult.

Failing to rouse some of the residents in the hallway, PC Dodson had to force entry to the flats to wake and alert them to the danger.

Despite suffering injuries while opening doors and inhaling a considerable amount of smoke, PC Dodson carried on through the three floors of flats and was successful in evacuating every resident safely, including a mother and baby, before the arrival of the London Fire Brigade. No resident was injured.

A Met spokesman said: “Without PC Dodson’s thought for the vulnerable, sleeping people inside and quick action he took, the incident could have easily spiralled into tragedy.”

PC Dodson said: “There was a press article the next day reporting that the fire had completely destroyed the flats. It wasn’t till I read that, that I realised I’d actually probably saved some lives.”