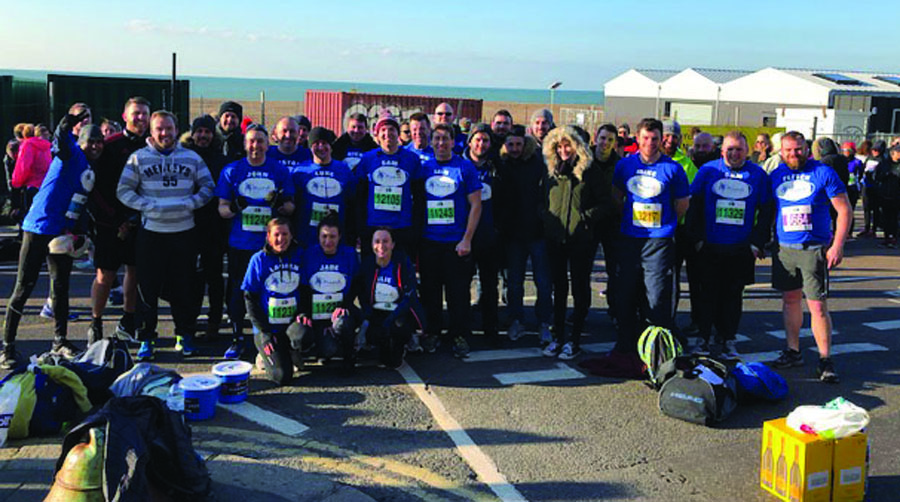 Police officers ran a half-marathon on Sunday to raise cash for the family of a colleague who committed suicide and to raise awareness of mental health issues in the force.

Coppers from Greenwich MPS’s Emergency Response Team D made their way down to Brighton to run in memory of their colleague Ray Thwaites who lost his battle with depression last year.

Nick Fletcher, 31, a colleague and friend of Mr Thwaites, said: “Ultimately it has been about getting something positive from the most traumatic thing that could happen to a family and a community of colleagues. It’s been a good healing process.”

Mr Thwaites was Mr Fletcher’s senior when he joined the Met eight years ago.

Mr Fletcher said: “As a person, he was so funny. He had this morbid sense of humour which resonates with me and other colleagues.

“He was just so inclusive of everyone and he would try and make everyone feel part of something. Some of the stuff he would come out with was unreal.

“Not long after I first started working, we were on patrol in a marked police car. He pulled up at the side of the road and wound down the passenger window where I was sitting.

“I ended up asking for directions to somewhere I already knew, but once I’d already got the response Ray still sat there. I was left for about a minute and half trying to bullshit my way through it and Ray was creasing with laughter in the front.”

Men account for three quarters of suicides in the UK according to Office of National Statistics (ONS) data and the 40 to 44 age group are the most vulnerable.

Mr Fletcher said: “Whatever Ray was going through, it was going on for a while and he never spoke about it really.

“I have suffered with depression since I started with the job. Initially you try and find your feet, keep yourself to yourself, but as I got to know people I have become more open.

“With Run4Ray I have spoken about my experience hoping that if there are others in the team who want to talk about it they will do.

“I found ultimately that medications I have tried don’t work, the only thing that seems to have a definite 100 per cent improvement rate is being open and honest and talking about stuff. On a personal level that is how I see it.”

Greenwich council donated the services of two minibuses to ship the 28 officers down to Brighton on Sunday for the race and officers across the Met filled in for them on the beat.

Mr Fletcher said: “We are not athletes in any stretch of the imagination, a few of us are more athletically gifted. But some people in their 50s put in a lot of the work to do this yesterday. It was a really good team effort.

“When I started training, I went out to do a 4k run and I was stopping all the time. But I’ve built up my fitness over the months. Then at work last week, my back gave way. But luckily the back just about held up on the race day.

Mr Fletcher is looking to run the full Brighton Marathon on April 15, almost exactly a year on from Mr Thwaites death on April 30, 2017.