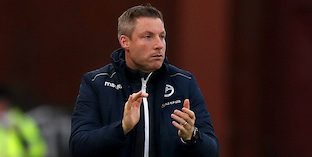 Neil Harris has hinted that some of Millwall’s loan players could return to the club in January for a temporary spell before heading back out on loan.

Ben Thompson is winning rave reviews at League One leaders Portsmouth but is not eligible to play in the Lions’ FA Cup game next month after featuring in an earlier round for the South Coast outfit.

The same applies to Fred Onyedinma, who has been out on loan at Wycombe Wanderers and scored his fourth goal for the League One side just before Christmas.

Tom King has returned to AFC Wimbledon’s starting line up in their last couple of fixtures while Sid Nelson is gaining game time at Swindon Town.

Asked if he had privately made his minds up on the future of his loan players, Harris replied: “Yeah, of course I have got some thoughts myself and so do the staff on individuals.

“We need to react to what we can do in the transfer market as well. We certainly need to add to the group. We’ll have to judge as we go.

“People think it is straightforward – they are our players so go and do what you want. But we have to work out what is best for us in the short term and long term for their development and learning.

“Even if we call back players next week it doesn’t mean they have to be with us for the rest of the season. They can come back to us for a week or 10 days – train and play – then go back to their clubs. As long as they only play for those clubs [Millwall and the same loan club] then it’s fine.”

Harris is keeping a tight lid on the players he has on his wanted list.

“We’ve got targets,” he said. “We’ve identified the players we’d like to bring in. The recruitment department is working hard to try and get those in a position where we can speak to the clubs.

“We know the areas of the pitch we want to strengthen to give us more quality, experience and competition.

“Getting results really helps everybody the confidence to perform better. We had an upturn in fortunes last year [at the start of 2018]. Yes, we gained experience from the first half of the season but we also added players in the [January] window like Ben Marshall and real experience in Tim Cahill and Jason Shackell.

“This summer we brought in Jem Karacan. He hasn’t played a lot of football but has been brilliant at the training ground and around the group.”