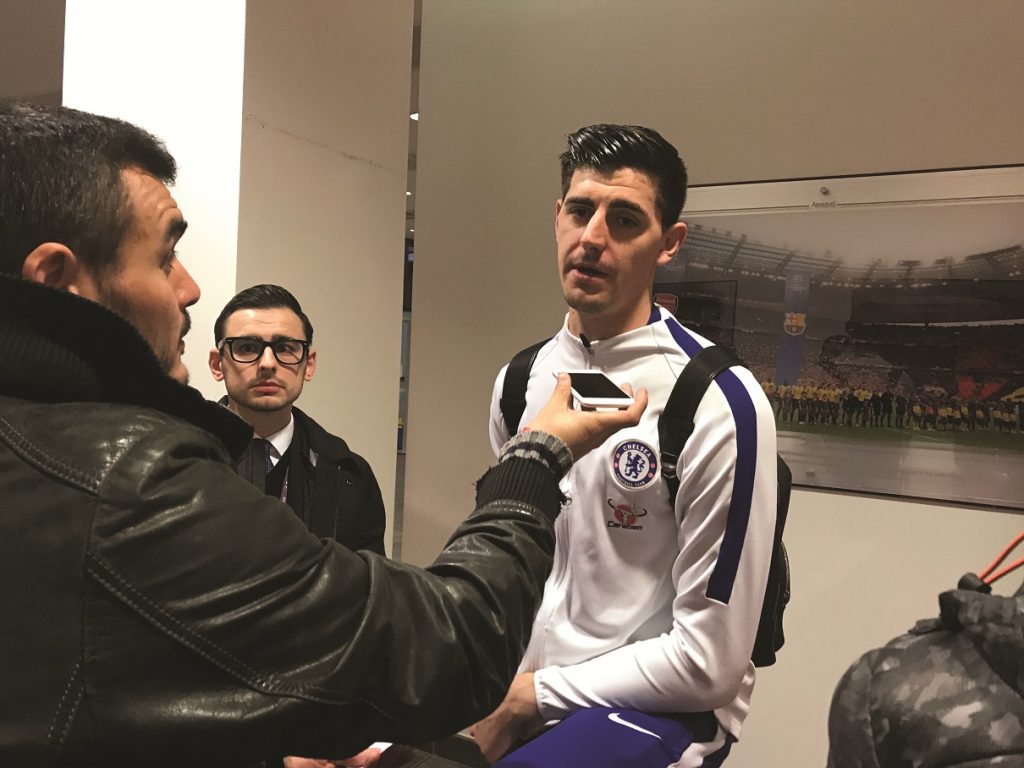 Thibaut Courtois is clearly in a good place right now.

While the Blues dropped two points with a 2-2 against Arsenal at the Emirates last night, the Belgium goalkeeper, 25, is looking forward to the months ahead – a serious tilt at the Champions League is something he craves and expects, and, just as importantly, he’s enjoying his life in SW6.

Both he and the mercurial Eden Hazard are in contract negotiations with the the club over extending their stay at Stamford Bridge.

He said: “I’m just calm and relaxed because I’m tied to Chelsea.

“Despite the rumours and everything, I am focused on Chelsea and I’m happy here.

Is he and Eden encouraging each other to sign new deals?

“Yes, we stick together,” he said.

“For the ambition of the club, a guy like Eden must stay.

“Losing a player like Eden would be bad for us, the club. Eden is irreplaceable. With the money he will raise, you can buy five players but none of them will be like Eden. It would be like Barcelona losing Messi or Real Madrid losing Ronaldo.

“For us, Eden has to stay as well.

“He will say to me ‘if you sign, I will sign’ and I say the same about him. I think we are both happy at Chelsea. We both have a big part to play. We have been champions twice in the four seasons I have been here. We can spend our  peak years together at Chelsea.

“I think it is important that we keep on playing for first spot (in the League) and as well as that, a big one for me is that we look to win the Champions League as well.”

Of his own contract negotiations, a resolution could be just weeks away.

“It has just turned the new year, so we will wait a few weeks and then sit around the table. I’m happy at Chelsea and a deal is close.”

Courtois understands that individual success on the pitch can attract the attention of other clubs.

Both he and Hazard have been mentioned as possible targets for Real Madrid.

He said: You can say the same about Harry Kane and Tottenham. If you excel, there will always be teams interested in signing the biggest players. But that’s why if Chelsea have ambition to be the best club in the world, those kind of players have to stay.”

Courtois has sympathy with clubs who are seeking to buy the best as the transfer market has rocketed recently.

“The market went nuts,” he said.

“The price being paid for players is too much. I understand the point of view of the club as well. You can’t ignore that. You can’t ask a club to pay so much money that it is maybe too much for a guy. That’s what’s happened in the Premier League now with it having so much money. Everybody smells that.”