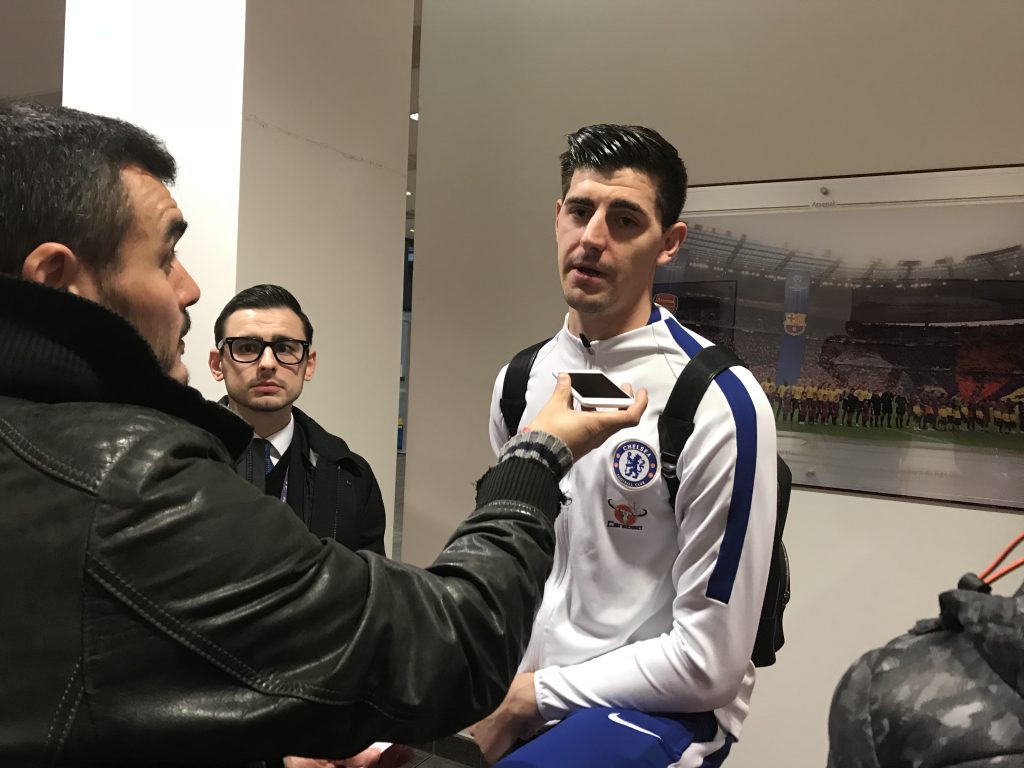 Thibaut Courtois was the hero for the Blues as they drew 2-2 against Arsenal last night at the Emirates Stadium.
The Belgium goalkeeper, 25, made a series of sensational stops to thwart the north Londoners as Chelsea first went behind before taking a late 2-1 lead, only to see three points slip way in added time at the end of the game.

Goals from Eden Hazard from the spot and Marcos Alonso was enough to earn a point, but for Courtois’s sensational performance it could have been a defeat.

He said: “It was an exciting game, maybe a point gained or two dropped, I don’t know. Obviously when you are winning near the end, it’s two points dropped. There were chances on both ends – both goalkeepers played well. Good for the neutral I suppose.”

Courtois had one of his busiest nights of the season so far.
“Well obviously this season, I haven’t been in action so much, especially in the past two months. I did not have the biggest saves to do.

“Last season against Manchester I had four big saves, but we were already winning 4-0. This season against Southampton I did one save in a one v one situation, I did well I think.
“But against Everton and Brighton, I did not have to make a save. A clean sheet is nice, but I knew I was in shape and training well.”

Courtois made two special saves against Arsenal and he said of them: “Alexis had the space and time to shoot where he wanted, so my thought was to stay, be ready and put it in the short post as I call it. I felt I was quick and with my length I could reach the ball, and then it’s about giving it that push. I was lucky that it went against the post and then the other post. Maybe you need that bit of luck. But with the save that I made, I deserved that luck.

”And with the second one, on Lacazette, he was more or less on the line of the penalty spot. I think not many goalkeepers would save that shot as it went into the corner, really fast, and because of my length and my speed on the ground, I saved it.

Of the two, which is the best?
“Both, It’s hard to say. Maybe the first was more reflex, the second one was a one v one with Lacazette. Then he had another shot that was deflected. I changed my body shape and saved that as well. Every save has it’s difficulty and every save, it’s nice to make.”

Chelsea went behind in the second half when Arsenal’s  Jack Wilshere smashed home a close range shot. Hazard equalised from the penalty spot within minutes and Marcos Alonso appeared to seal all three points with a late strike before Hector Bellerin’s 20-yarder forced a late, late equaliser.