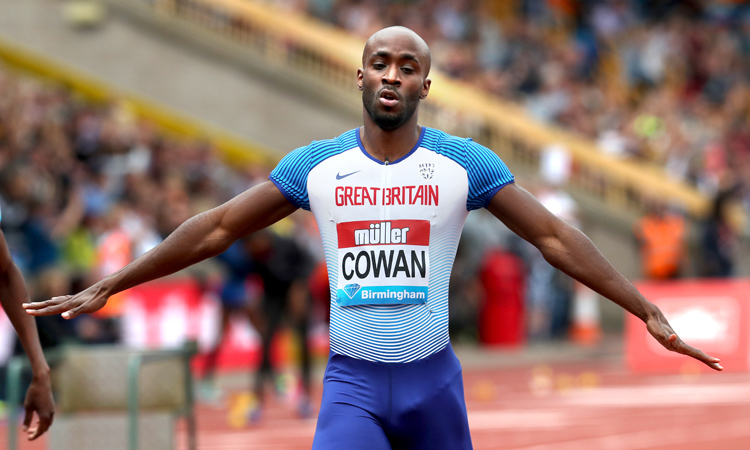 Dwayne Cowan is ready for his Commonwealth Games debut – revealing he has trained so hard that sometimes after sessions he is in pain just sitting down.

The Peckham man, 33, is part of the England 4x400metres team which is hoping to medal out in Australia.

Cowan won a bronze with Great Britain at the IAAF World Athletics Championships and finished first in the 400m at the Diamond League Grand Prix in August.

Cowan, coached by his dad Lloyd at Hercules Wimbledon AC, made his international bow when he won gold at the European Team Championships in 2017.

“I was thrown in the deep end at the European Championships,” Cowan told the South London Press. “We were not even a favourite to get a medal. It shows the power of positivity – everyone told me to go out and try my best.

“It’s going to be hard to set a new 400m personal best at the Commonwealth Games, because it is so early in the season. It’s my first time running this early in the year and my body might not like it, or you could end up doing good things and get that PB.

“Every time I step on the track I try and break my PB.

“Getting selected for the Commonwealth Games is a nice reward for the hard work I have put in. Some other years I have thought I am in really good shape and then ended up not getting to where I want to – even though I have trained really hard and left everything on the track.

“Some days going home you can’t even sit down, because your body is so sore.

“I train six days a week. I train for four hours and then go home and recharge my body – the training is so hard it puts you to sleep. People don’t understand how far we push our bodies – to the limits every day.

“Some days I can’t even stand up after a run. I have got to lie on a cold floor, I find it hard to breathe – you push your body so far it is in shock.”

Cowan switched to athletics in 2012 after previously concentrating on football. He was a striker who had trials with Millwall, Leeds and Colchester United but also played non-league for Fisher and Sevenoaks.

“I was dropping down the leagues and lost my motivation for playing – I wasn’t training as I was meant to be training,” he said. “I felt I needed to go into a different sport. It was luck really, I was was training on the grass near where I used to live in Wimbledon – trying to keep fit for some trials at AFC Wimbledon, who were in the Conference at the time – and I found out there was an athletics track there [Hercules Wimbledon].

“The coach there at the time told me I wasn’t an athlete and would never be an athlete. I was trying to get fit and so I kept doing both, athletics and football, that was how I started.”

As a late entrant in the sport, does that give him extra longevity?

“I can carry on as long as I want to,” said Cowan. “But it is whether I want to. I think another two years would be good, that would be perfect.

“I’d like to get individual medals too. I think I could do something in the 200m field, get a fast lap.”

“You are running in lane one all the way, so it’s quite tight. The 400m you are coming out of blocks but you are rolling in the 4x400m and can get up to speed without too much effort put in. That’s why the times are usually much faster.”

“I just try to relax and chill,” said Cowan. “I try not to think about the race until I get to the stadium.

“I don’t do as many warm-up drills as other athletes, because I have come from a different background. I do quite a few football drills to get ready.

“In terms of the race itself I make my mind go blank – and just run.”