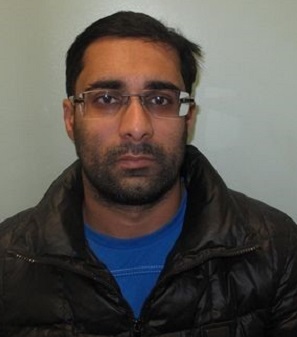 A dim witted criminal who reported a stolen car to the police has been jailed after officers then found almost 20 stolen cars in his possession.

Chirag Patel, 39, of Frith Road, Croydon, reported to police that his Porsche had been stolen on Sunday, February 1, 2015.

Croydon Crown Court heard how at first Patel resisted giving his home address, instead providing details of his parent’s address.

When he finally gave his own address, officers attended the property as part of their investigation into the stolen car.

Here they discovered a number of high-value vehicles in the basement car park.

Officers identified that one of cars had a personalised number plate identical to one seen earlier on a vehicle outside Patel’s parents’ address.

Further inquiries by officers established that the five vehicles in the car park had false number plates and all were later confirmed to have been stolen.

Patel was arrested at his home address on February 19, 2015.

During a search of his property, officers recovered 26 sets of car keys, as well as lists of vehicles and registrations, machines for accessing on-board computers in vehicles, programming keys and a number of mobile phones, tablets and laptops.

Following a detailed investigation, led by officers from Croydon’s Serious Acquisitive Crime Unit, a total of 19 stolen vehicles with an estimated value of £728,000 were linked to Patel and subsequently seized, as well as nine sets of keys which had been stolen from Jaguar Land Rover’s plant in Solihull, West Midlands, and a laptop stolen during a burglary in the Streatham area.

It was later discovered that Patel had been using the vehicles in the running of an ‘off-the-books’ vehicle rental business where vehicles were rented out to his associates and contacts.

The vehicles had been stolen by unknown individuals during burglaries and keyless thefts across London between October 2012 and January 2015 and were stored at or near addresses owned by Patel and his family, or with associates who looked after the vehicles for him or rented them from him.

The identities of the cars were concealed using legitimate insurance details of vehicles which had been written off. Patel was jailed at Croydon Crown Court on Friday, October 12, for:

He was found guilty the same day following a five-week trial. Acting Detective Sergeant Billy Clough, who led the investigation, said: “Patel played the leading role in a sophisticated operation to handle high-value, stolen vehicles, motivated only by sheer greed.

He even attempted to convince the jury that he was a legitimate businessman, who had simply been unlucky in obtaining such a vast quantity of stolen items, but the jury saw through this and convicted him of being the key player in a significant criminal enterprise.

I hope this sentence sends a message that those involved in this type of organised criminality will be pursued robustly.”