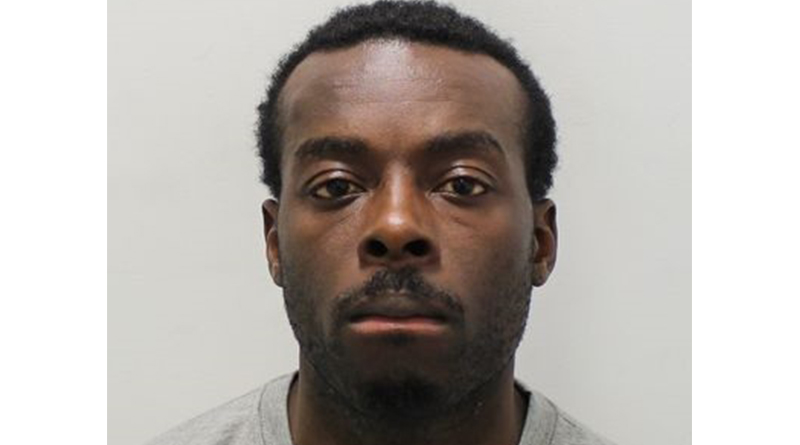 A sex attacker who robbed his victim then returned to her home to terrorise her further has been jailed for life for a clutch of offences.

Yanick Makunga, of Warwick Road, Croydon, attacked a woman outside her Dulwich home – but was arrested within an hour after officers tracked the mobile phone he had stolen from the victim.

The 34-year-old – dubbed “a danger to women” who had already served time for rape – was sentenced to life imprisonment to serve a minimum of five years and 57 days at Inner London Crown Court on Tuesday, 25 June.

He admitted false imprisonment, robbery, committing an offence with intent to commit a sexual offence and possession of cannabis at the same court on Friday, 15 March. He denied attempted rape; this charge will lie on file.

The victim, in her 30s, was attacked by Makunga outside her home in the early hours of Thursday, 14 February.

He sexually assaulted her; during the attack told her he had a knife, and demanded money. He marched her to a local shop where she withdrew some cash from a cash machine before he left her.

But when the victim returned home, Makunga was there. She ran off and went to a relative’s house, and police were called.

During the incident, Makunga had stolen her mobile phone which had a “find device” app installed, tracking the movements of the phone.

Officers carried out fast-time enquiries and went to the locations the phone was transmitting, eventually identifying and arresting Makunga on George Street in Croydon. Upon being searched, he was found with other valuables belonging to the victim.

The woman received specialist support at a Haven.

The court heard that Makunga had a previous conviction for a rape committed in 2009.

Detective Constable Kara Eyre, of the South East Command Unit Safeguarding Team, said: “This was a terrifying attack which has left the victim traumatised. It is every woman’s worst nightmare.

“Even after her cries to stop, he did not hesitate to frogmarch the woman to a cashpoint and rob her, and then return to her home to continue to terrorise her.

“The attending officers had the foresight and instinct to quickly establish the victim’s phone, which Makunga had stolen, could be traced. It ended up leading them right to their suspect, and detaining him so he couldn’t pose any further risk to the public.

“Makunga is a danger to women, and jail is the right place for him.”