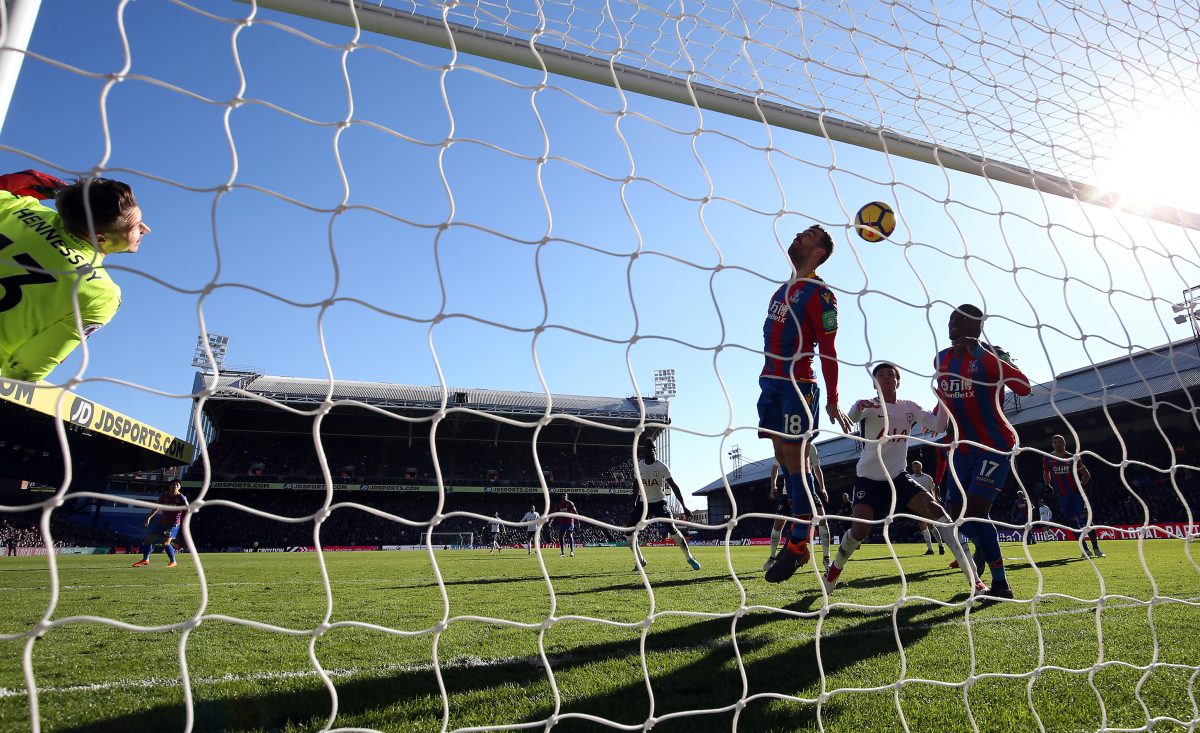 By Matt Woosnam at Selhurst Park

A late Harry Kane header condemned an injury-hit Crystal Palace to a second consecutive defeat as Tottenham emerged 1-0 victors in a tense match at Selhurst Park.

The striker had an uncharacteristically poor game, but rose high to nod home an 88th minute Christian Eriksen corner to earn his side a deserved three points, but it was not before the visitors had spurned several good opportunities to take the lead.

Palace were without 12 first-team players through injury, after Joel Ward and Yohan Cabaye were added to an ever-increasing injury list. Mamadou Sakho failed to recover from the injury which kept him out of the 3-0 defeat by Everton so it meant a debut for the 20-year-old right-back Aaron Wan-Bissaka – the first full league debut for an academy player in 2148 days – over half a decade.

Kane nearly capitalised on some poor defending by Patrick van Aanholt whose attempted clearance on 11 minutes fell kindly to the England man, but Wayne Hennessey spread himself well to block the shot.

With half-an-hour played, Spurs got in behind the defence again after Palace failed to clear, and Timothy Fosu-Mensah felled Kane inside the area, but the assistant already had his flag raised to indicate offside, much to the Manchester United loanee’s relief.

The Eagles failed to test Hugo Lloris, but Alexander Sorloth and Van Aanholt combined well down the left on several occasions, albeit ultimately to no avail.

The second-half began with more urgency than the first had ended, and it became a little tense, with Dele Alli going down easily under Van Aanholt’s challenge, much to the disgust of the Dutch defender who made his displeasure known, but Kevin Friend allowed play to continue.

Hennessey was forced into an excellent save on 73 minutes when Ben Davies’ shot looked to be trickling into the bottom corner of the goal, but the keeper was able to push it behind at the last moment.

Alli then appeared to go down in the area under no contact as Hennessey rushed out to prevent him reaching the ball, but again there was no repercussions either way.

With just six minutes remaining, Spurs, who had dominated possession, should have taken the lead as Serge Aurier – who was penalised on three occasions for foul throws – somehow managed to get the ball stuck under his feet at the back post with the goal gaping, and Palace eventually cleared.

But Kane was on hand to save the day for the visitors, as he capitalised on poor defending from Damien Delaney – who replaced the injured James Tomkins – to rise highest and nod past Hennessey.