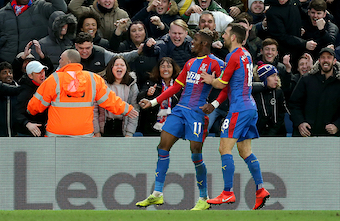 Vicente Guaita saved well from Ryan Frederick’s close range effort early on, before Lukasz Fabianski trumped him by denying McArthur who struck a fierce effort from the edge of the area two minutes later.

But Palace would go behind on 26 minutes when Mark Noble converted from the penalty spot after Guaita clattered into Michail Antonio from a West Ham free kick.

Five minutes later Christian Benteke stung the palms of Fabianski who flung himself to the right to prevent the Belgian striker pulling Palace level.

Referee Craig Pawson infuriated the Selhurst Park crowd when he cautioned Aaron Wan-Bissaka for a foul on Aaron Cresswell despite the Eagles defender reaching the ball first.

Javier Hernandez took aim from distance on the half volley but it was straight at Guaita who saved comfortably.

The visitors took a deserved lead into the break but should have been ahead by more after dominating despite the early Palace pressure.

Wilfried Zaha was quiet in the opening period but attacked down the left only for nobody to be on the end of his ball across goal.

Then, astonishingly, McArthur beat the offside trap and sold Fabianski a dummy, only to skew his shot against the post and wide from close range, then James Tomkins headed over when unmarked.

Palace were much improved in the early stages of the second half and Patrick van Aanholt went close from distance when he struck an excellent volley which dipped just over the bar.

The game was pulsating, with Palace rarely letting up the pace, and the crowd becoming increasingly riled at perceived simulation from Antonio and injustice from Pawson.

The Eagles’ relentless pressure paid dividends when Zaha picked up the ball from McArthur in a tight spaces inside the area, moved slightly wider and somehow – with the aid of a deflection – put the ball beyond Fabianski to equalise from the narrowest of angles, with 14 minutes remaining. Moments later only a fine save would stop him adding a second.

Although they pressed and pressed for a winner they were unable to turn a much improved second half performance into a victory.