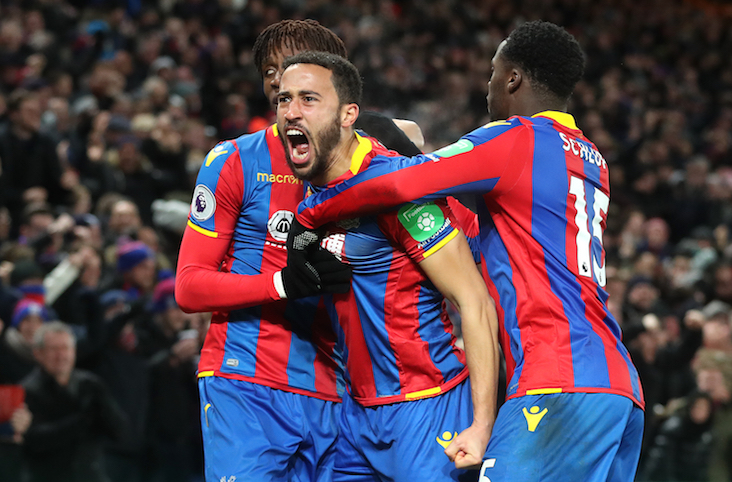 Crystal Palace’s eight-match unbeaten run in the Premier League is over as Arsenal had enough – just – to prevail at Selhurst Park.

It looked game over for the Eagles with 24 minutes left to play as Alexis Sanchez got his second goal of the evening to nudge the north Londoners into a 3-1 lead.

But Palace are no longer the soft touch of the early weeks of the campaign and did not let their undefeated sequence go without at least a late fight.

James Tomkins guided home an 89th minute corner to give hope that a fightback was still on the cards.

The Eagles did not dominate for prolonged spells, enjoying their best periods of attacking play in mini bursts, but that was still enough to leave a feeling that there could have been an even better outcome for Roy Hodgson’s side. The next task doesn’t get any easier, Manchester City the visitors to SE25 before 2017 finishes.

Palace struggled to get any fluency in the opening 45 minutes. Shkodran Mustafi sidefooted home in the 24th minute after Julian Speroni could only parry Alexandre Lacazette’s whipped effort out to the lurking centre-back.

Wilfried Zaha was the only home player who quickened the pulse and showed an ability to up the tempo for a flat home side in the first half. And that largely remained the case until the introduction of Bakary Sako. Ruben Loftus-Cheek was a disappointment with Christian Benteke a peripheral figure.

Speroni had denied Mesut Ozil on the half-hour mark to keep a penned-back Palace in the contest.

And predictably Zaha was involved in the leveller just five minutes after the second half started. His cross was dispatched first time by Andros Townsend into the bottom left corner of the net.

Game on. But Arsenal settled back into their rhythm and Sanchez restored the lead on 63 minutes. A spiteful strike – going through the legs of Tomkins – increased the difficulty level for Julian Speroni, who got a gloved fingertip to the ball but could not prevent its final destination of the back of the net.

Soon after and it became 3-1. Jack Wilshere split the defence with a ball forward which Sanchez caressed off his right knee before nicking it beyond the advancing Speroni.

Palace tried to mount a response. Zaha, almost by default the standout attacker for the South Londoners this season, is not renowned for his heading ability. That remains the case after Sako’s cross clipped off his left shoulder as he dived in sensing a moment of glory.

Tomkins did reduce the deficit but the Eagles could not find that one more moment in stoppage time to mount a last-gasp comeback.