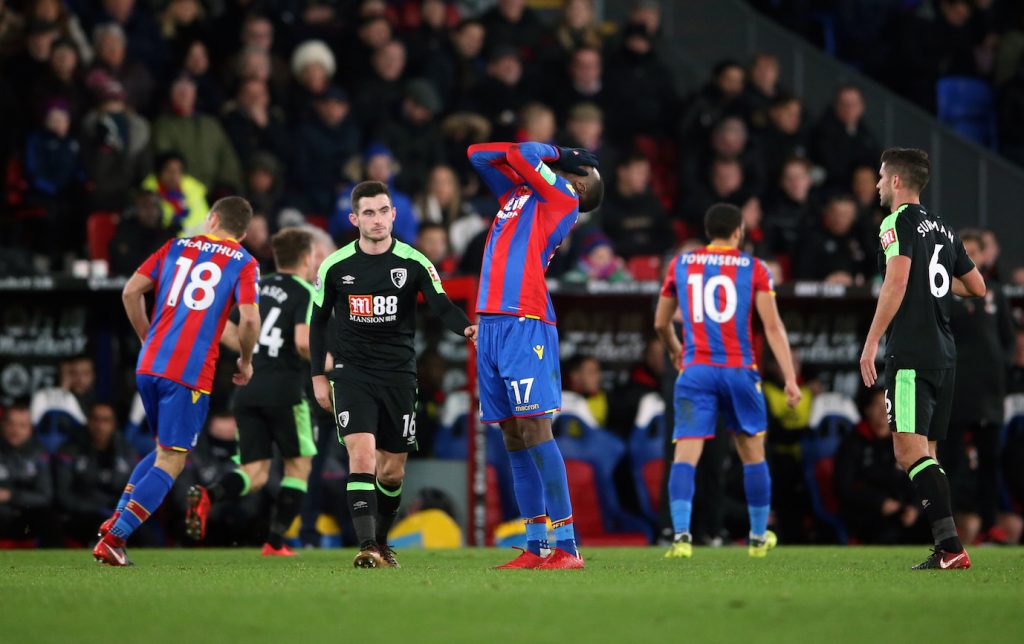 Crystal Palace Sport
9 December 2017 Richard Cawley 0 Comments
Christian Benteke missed a last-minute penalty to spurn the chance to end his goal drought and earn Crystal Palace three points as Jermain Defoe’s stunning finish earned Bournemouth a point at Selhurst Park, writes Matt Woosnam.
In a game riddled with controversy, referee Kevin Friend awarded the Eagles a penalty in either half, with Wilfried Zaha going down under Asmir Begovic’s challenge in the first half. Bournemouth players were furious with the decision and replays were inconclusive.
Their rage reached fever pitch in the final minute when Zaha again went down under a challenge and Friend pointed to the spot for a second time, but Benteke took the ball from regular penalty taker Luka Milivojevic. The striker tried to be cute and trick the goalkeeper, succeeding only in striking the ball tamely, and he saw Begovic make the save.
It is now 12 games without a goal for the Belgian, who is yet to find the back of the net this season.
Defoe had opened the scoring for the visitors early on after a well-worked corner routine saw him fire the ball low into the bottom corner on 10 minutes.
Their joy was almost cut short soon after when the ball bounced around inside the penalty area but both Ruben Loftus-Cheek and Mamadou Sakho somehow failed to bundle the ball into the back of the net.
Palace were however able to find an equaliser from the spot as Milivojevic confidently dispatched past Begovic after Zaha was brought down.
It did not take long for the Eagles to turn the game on its head as Yohan Cabaye superbly created space in the area and drilled low across goal for Scott Dann to slide the ball home.
But questions will be asked of their ability to hold the lead as Lewis Cook played a delightful ball over the top for Defoe to lash home a stunning volley from the edge of the box – reminiscent of Patjim Kasami’s wondergoal for Fulham several years ago at Selhurst Park.
The second half became fractured with Friend’s management of the game questionable with several flashpoints. Cook lost the ball inside his own half and allowed Zaha to run on to it, but realising his mistake he aggressively scythed the Ivorian down from behind but somehow escaped with just a booking. The incident infuriated Zaha whose reaction also earned him a yellow card.
Defoe wasted a glorious chance to put the Cherries ahead when he snatched a shot wide midway through the half, but neither side looked like getting a winner.
That was until Zaha danced past two defenders in the area and went to ground, with Friend pointing to the spot. Benteke took the ball from Milivojevic and unforgivably failed to hit the back of the net as Palace returned to the bottom of the Premier League table despite another game without defeat at home.