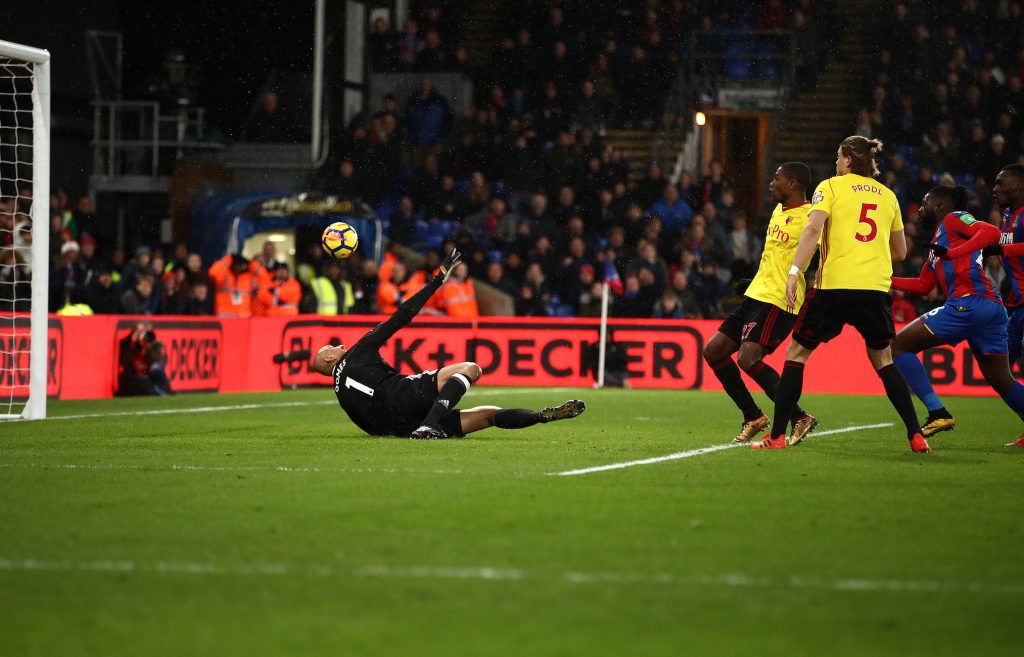 Crystal Palace are out of the relegation zone after substitutes Bakary Sako and James McArthur scored late goals to earn a precious victory for Roy Hodgson’s side against a stubborn Watford outfit.

Palace were trailing to Daryl Janmaat’s third minute headed goal and a comeback looked implausible until Tom Cleverley was dismissed for a second bookable offence a minute before Sako’s rebounded effort bundled over Heurelho Gomes in the 89th minute.

McArthur’s composed 90th-minute finish from Wilfried Zaha’s pull back sealed all three points for the Eagles in a game that extends their unbeaten run to six games.

The Eagles have 14 points from 17 games, one clear of the relegation zone in 17th place.

Sako had his first rebounded effort from short range saved by Gomes but the ball trickled in off the Malian’s shin to draw the Eagles level and McArthur netted his fourth goal of the season with a left-footed eight-yard effort into the bottom corner.

Cleverley received his marching orders for a late tackle on Jeffrey Schlupp following a first booking in the 78th minute.

Julian Speroni’s first duty on his 400th appearance for the Eagles was to pick the ball out of his own net after Janmaat buried a six-yard header from Richarlison’s pinpoint delivery with an inswinging left wing cross.

Timothy Fosu-Mensah struggled to live with the pace and skill of Richarlison in the first who ran at the Dutch international at every opportunity. Richarlison’s lofted ninth minute cross was controlled by André Carrillo whose pull back found the 20-year-old Brazilian but his goal-bound effort was blocked by Scott Dann’s head on the line.

The Eagles’ skipper almost equalised before the half hour mark when his 10-yard header from Yohan Cabaye’s corner went just wide of Heurelho Gomes’s right-hand post.

Palace could have been two down a few minutes later when Cabaye swiped thin air and Troy Deeney played a one-two with Richarlison whose low cross found the onrushing Deeney via Dann’s outstretched right boot that had just enough pace on to force the striker’s four-yard effort wide.

Palace’s should have equalised early in the second half when Luka Milivojevic’s clipped ball fed Fosu-Mensah down the right wing and his pull back found Ruben Loftus-Cheek but the 21-year-old’s side-footed effort was blocked by centre-back Adrian Mariappa.

The Eagles could have been further behind when Janmaat’s 66th minute was misjudged and the ball fell to Richarlison eight yards out but the winger directed a meek effort at the advancing Speroni.

That miss and Cleverley’s red card set up the late drama to bolster Palace’s survival hopes ahead of the visit to Leicester on Saturday.