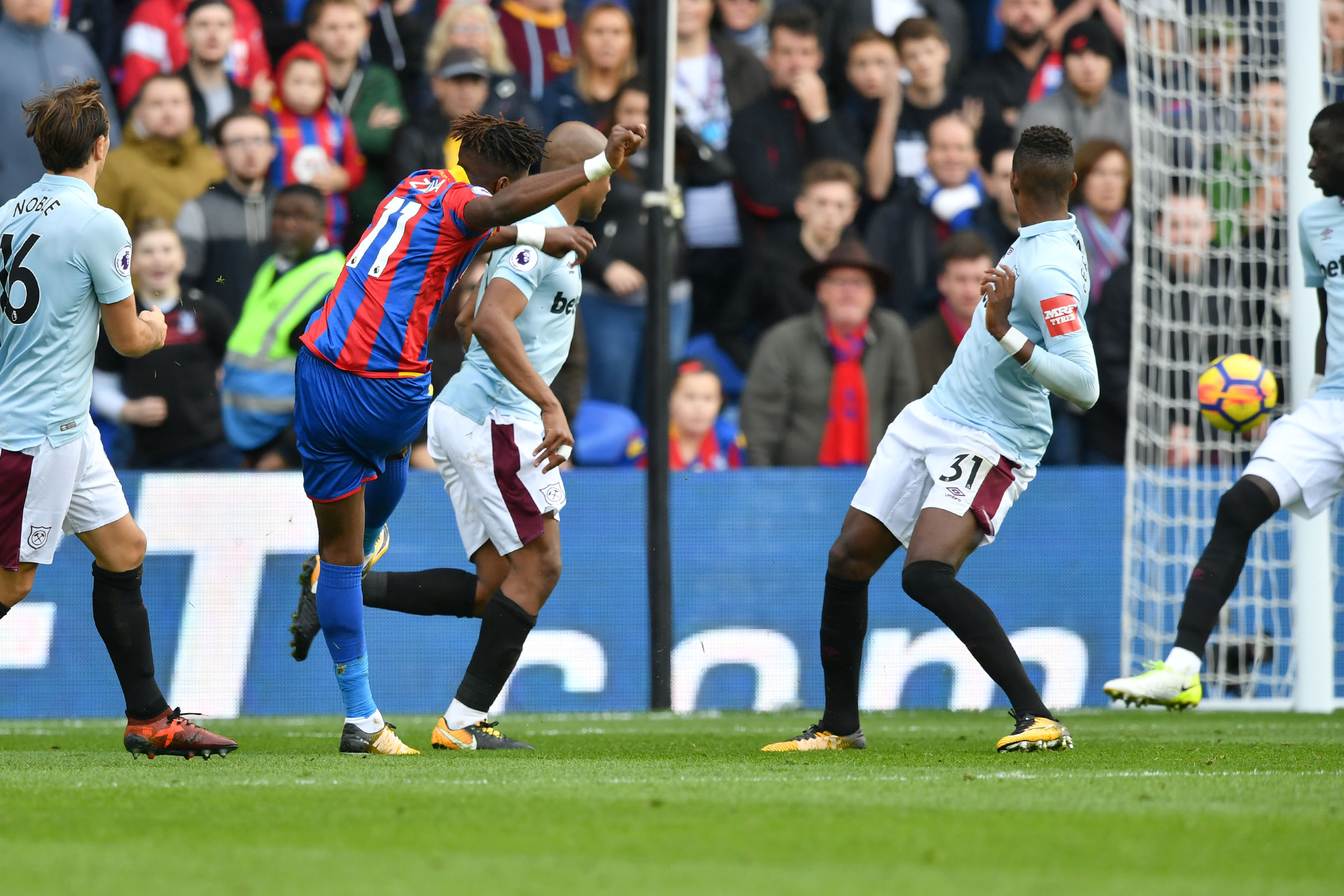 Wilfried Zaha rescued a point for Crystal Palace with a 97th-minute equaliser as the Eagles prevented a ninth league defeat of the season, writes Conor O’Sullivan.

Luka Milivojevic’s penalty after 50 minutes led to a siege on the West Ham goal after first-half strikes from Javier Hernandez and Andre Ayew left Palace chasing yet another deficit.

Palace remain bottom on four points with 10 games played but are only four adrift of safety after Zaha’s composed finish from 18 yards with the game’s final action.

West ham captain Mark Noble had to be separated from Palace players at the final whistle following a feisty derby.

The Eagles dominated long periods with Yohan Cabaye striking the inside of Joe Hart’s post with a 20-yard effort minutes after Milivojevic’s spot-kick.

Ex-West Ham defender James Tomkins saw his 90th-minute header tipped onto the the underside of the crossbar by Hart and substitute Bakary Sako sent his three-yard rebounded effort over. Tomkins also had his 35th-minute point-blank header saved by Hart before the England keeper made an instinctive stop from Jeffrey Schlupp on the rebound.

Zaha forced Hart into another fine save after 75 minutes with a strike from the edge of the box and minutes later Cabaye was denied when his 25-yard free-kick parried.

Andros Townsend, starting in a front two with Zaha, gave Palace hope in the 49th minute when he was awarded a penalty following a trip by Angelo Ogbonna and the Serbian buried his penalty into the bottom right-hand corner.

Palace made the brighter start to the game before left-back Patrick van Aanholt was forced off after 11 minutes with a suspected hamstring injury. Townsend made a few surging runs at the West Ham defence in an uneventful first half an hour with the Eagles wasteful with their final ball.

Palace fell behind in the 31st minute after Zaha went down in the West Ham box under the challenge of Jose Fonte. Replays showed the 24-year-old was fouled by the Portuguese defender before West Ham broke upfield and Aaron Cresswell’s left wing cross found Javier Hernandez eight yards out from goal. The former Manchester United striker dispatched a flicked right-footed effort past Julian Speroni.

The Eagles were in an even bigger hole moments before half-time when Luka Milivojevic was dispossessed in midfield and Ayew unleashed a 20-yard strike that flew past Speroni into the top-right hand corner. Ruben Loftus-Cheek put a four-yard header wide on the stroke of half-time from another Cabaye corner.

Bakary Sako replaced Joel Ward on the hour mark as Hodgson pushed for an equaliser and he stretched the West Ham defence as Palace dominated possession in the closing stages. The result seemed to be settled after Sako’s miss before Zaha rescued Palace with his late, late goal.