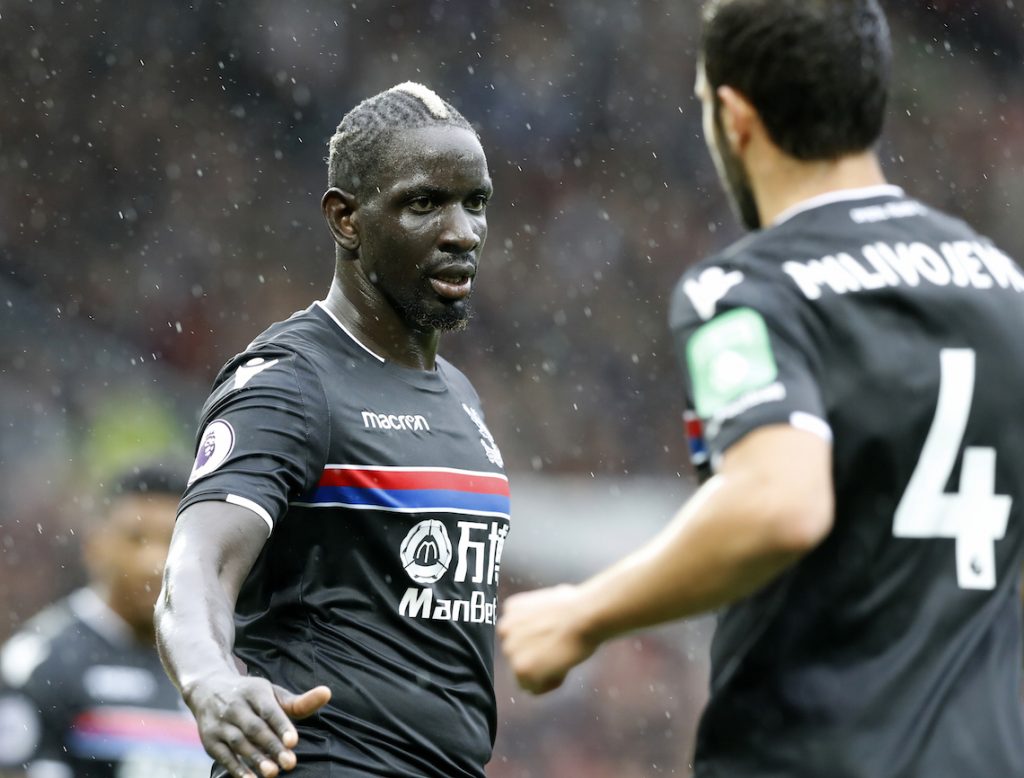 French central defender Mamadou Sakho put in the epitome of a captain’s performance on Saturday when his stoppage time tap-in from close-range completed a dramatic comeback for Crystal Palace as they beat Stoke City 2-1 at Selhurst Park.

That victory, combined with a win for Palace tonight at Brighton and a West Bromwich Albion defeat at home to Newcastle, will put Roy Hodgson’s side equal on 11 points with the Midlands team who currently lie one place outside of the relegation places. It could even move them out of the relegation places if there was a hugely improbable nine-goal swing.

Palace fans will be hoping that Sakho’s strike will prove to be the inspiration for their side to climb out the relegation places ahead of Christmas and for Hodgson, giving Sakho the unique rainbow-coloured armband – specially coloured as part of the Premier League anti-homophobia campaign – was an easy decision.

Hodgson had dropped Scott Dann to the bench for his starting 11 for Stoke and revealed in his post-match press conference that Dann had done nothing wrong to lose his place but that he had to “shake things up”. With Jason Puncheon also on the bench, the gaffer had needed to look for a new leader on the pitch.

“It was a late conversation,” said Hodgson to the South London Press at his pre-Brighton press conference about giving Sakho the captaincy for Stoke. “I didn’t announce the decision to play [James] Tomkins (in place of Dann) until the day before the game and in actual fact I didn’t tell Mamadou, strangely enough, until the day of the game [that he would be captain].

“Scott has been doing [the job of captain] very, very well and before him Jason did it very well too, but with the two of them not playing I had to seek another captain.”

Hodgson was quick to focus in on Sakho, with the 27-year-old former Liverpool and Paris Saint-Germain player having worn the captain’s armband for France previously, and PSG, when he became the youngest-ever player to wear it for the French club, having taken the role on at just 17-years-old.

“I was aware, of course, of Mamadou Sakho’s captaincy record in the past,” said Hodgson. “With captaincy you want to choose somebody who is very well-respected by the other players, someone who is capable of taking some responsibility on the field of play, someone who’s going to be very representative for your club and somebody whose performances represent your values.

“It seemed to me that he would be a very good choice, not least of all his influence over the other French players we have.”

The winning strike for Sakho was his first for Palace, and his first in the Premier League since he struck in the 4-0 Liverpool win over Everton in the Merseyside derby in April 2016, and with another big derby imminent for Sakho tonight, Hodgson was quick to point out that he just wants his £26 million August deadline day signing to continue what he has been doing.

“I’m expecting him to be Mamadou Sakho,” said Hodgson to the South London Press when asked if he would be asking his captain to do anything special ahead of such an important game for everyone connected to SE25.

“What you can hope is that he brings his qualities as a player – and as a person, which involves leadership qualities. I don’t expect anything extra from him, I just expect him to do that.

“We don’t do the Churchillian speeches in the dressing room, we leave that to the myth of the football world. We do our work out on the training ground every day and that’s where most of the talking goes on, on that patch of grass.”