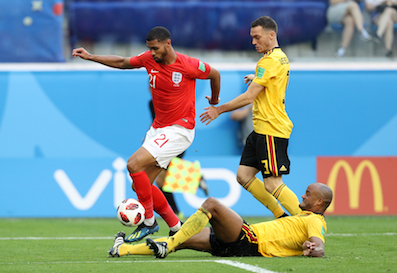 Roy Hodgson is not looking into the possibility of signing Ruben Loftus-Cheek because Chelsea have not made the England midfielder available – but the Crystal Palace boss will certainly be interested should they offer him out on loan in January.

The Lewisham-born youngster was on loan with the Eagles last season, scoring three times in 25 appearance.

But the west Londoners chose to keep him during the summer transfer window and the 22-year-old has subsequently made just two substitute appearances this season. He also featured for England in Tuesday’s friendly victory against Switzerland.

After appearing for the Three Lions, Loftus-Cheek said that it was “possible” that he could return to Selhurst Park, but Palace boss Hodgson was coy about discussing a potential move with Chelsea yet to formally make him available.

The 71-year-old said: “I’ve answered this question before [on potentially re-signing Loftus-Cheek]. I can’t answer the question ‘is that something you’re looking at’ because how can I look at it? He is a Chelsea player.

Despite making the national squad for the recent round of international fixtures, and having played at the World Cup in Russia, Loftus-Cheek’s place in Gareth Southgate’s squad is under threat due to his lack of game time at Chelsea. It has prompted many outsiders to suggest that he should have sought a loan move in the summer.

But Hodgson – Southgate’s predecessor – feels game time is not particularly relevant when selecting the national team squad given that many English players are competing for their places at their respective clubs with multi-million pound, big-name talent. Instead, the former Liverpool and Fulham boss feels it is important that Southgate selects his best players rather than focusing too much on how much game time they have each had.

“At England during my time, we believed in the quality of the players that we had, we understood they were at big clubs and that big-name players were keeping them out. I’ve had many, many years of that debate so it leaves me a bit cold [to hear people suggesting Southgate has a problem].

“The players missing out at the big clubs happened to be English. When Danny Welbeck was at Manchester United and Raheem Sterling was at Liverpool, there were big-name players around them in their club squads so we had to have faith in those players who we selected.

“I remember having a chat about Chung-yong Lee with the South Korean manager who said ‘unless he [Lee] plays, he won’t be selected for internationals’ and I was really disappointed by that. I thought at the time that he was good enough to play for South Korea but I was not using him at Crystal Palace because the competition for his position was great.”