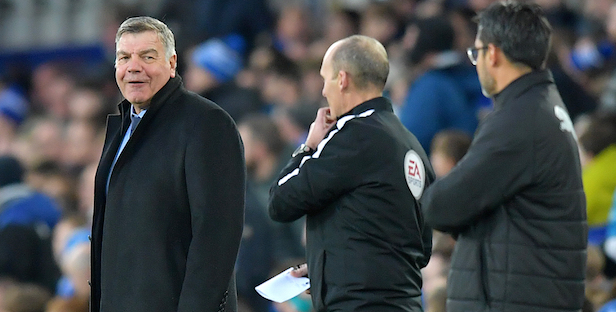 The former England manager left the Eagles in the summer – with claims at the time that he was retiring.

But Allardyce was appointed Everton manager at the end of last week.

Palace had a clause – believed to be compensation in excess of £2million – if the 63-year-old came back into the game.

“We were reasonably compensated by Everton,” said Parish. “There’s nothing to see – we’re very comfortable with the situation. Apart from against us, we wish him well.

“Not really [surprised he took a job]. I feel like I’ve got a good relationship with Sam, I like him a lot.

“There are things that have changed for him, since he left us.

“And I think where it is – and the opportunity  – it is very difficult for him to turn it down. And he did turn it down, I know that for a fact. He turned it down a couple of times.

“I love this football club – but I’m not deluded. I know Everton is a massive, massive club. And where he was, with England, his reputation was somewhat tarnished – unfairly in my view.

“I’m proud that I had a part in picking him up. He did a great job for us and was 100 per cent honest with me in the time he managed the football club.

“I thoroughly enjoyed working with him – his delegation, he gets a good team around him and got the luck of the devil. He sits in the stand and they [Everton] win 4-0 [against West Ham].

“Give me a lucky general. He nearly did it with us because we were amazing against Watford when he arrived.

“I don’t begrudge him. He feels a bit better about life and feels it is a bit different challenge.

“I watched him smiling after the game. When you’ve been fighting relegation for a lot of years as a manager and then you get the England job and fight relegation one more time there is a kind of statute of limitations to that; you know you are going to take one job too many if you’re not careful.

‘This is different. We all know the kind of money they are going to be prepared to spend. I wish him every success.”