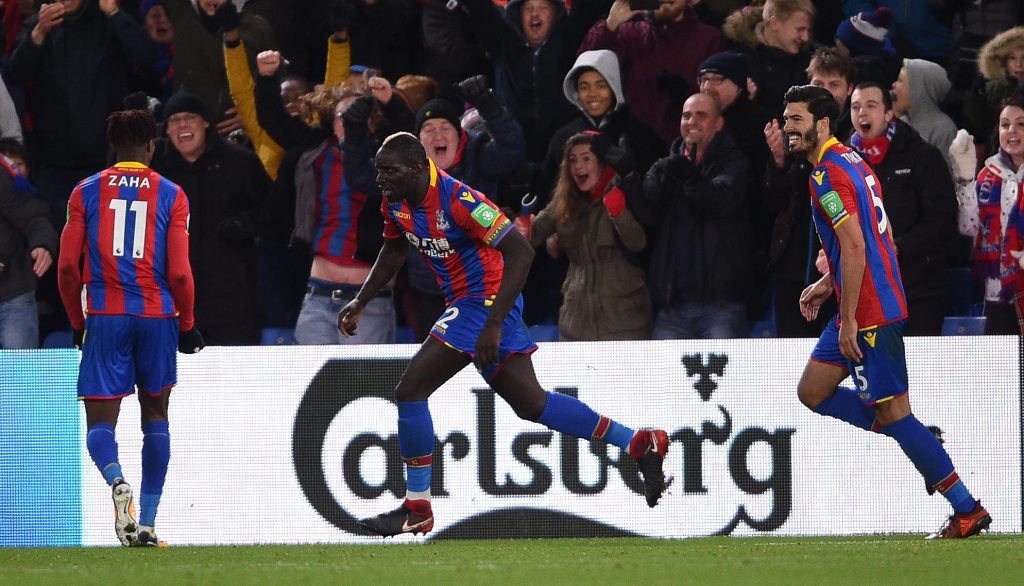 By Conor O’Sullivan at Selhurst Park

Sometimes a scrappy victory is the most satisfying. That proved to be the case for Crystal Palace, who emerged from a contest that was low on quality for long periods with three vital points.

Stoke City at home would have been targeted as a winnable game by Eagles boss Roy Hodgson. But after 53 minutes it appeared Palace had again fallen victim to a lapse in concentration following wasteful finishing.

The Eagles were second best for long periods of this contest but took their chances, showing character and spirit ahead of a defining period in their season.

Palace travel to the Amex Stadium tonight to face arch-rivals Brighton and are only three points adrift of 17th-placed West Bromwich Albion.

The two clubs have not met since Wilfried Zaha’s brace sent Palace to the 2013 Championship play-off final on their way to Premier League promotion. There will be an electric atmosphere, but the players must put aside the emotion and fanfare of the occasion to produce an improved performance against a Brighton side that has adapted well to Premier League football.

Christian Benteke came on as a second-half substitute for the second consecutive game running and made a decent contribution, despite missing a short-range opportunity shortly before Palace fell behind. The Belgian is still regaining his match sharpness  – an up-to-speed Benteke, Zaha, Andros Townsend and Ruben Loftus-Cheek can be a potent force.

The talismanic Zaha laid the ball on a plate for Loftus-Cheek after 15 minutes. Zaha left Stoke captain Ryan Shawcross for dead with his searing pace and picked out the Chelsea loanee with a low cross who he should have converted from eight yards.

But the pair, alongside Townsend, are beginning to find a real fluency as an attacking trident.

Zaha burst through on the right-hand side in the 35th minute to find Loftus-Cheek and the 21-year-old’s pinpoint cross was nearly converted by James McArthur, who was denied twice in a flash by Kurt Zouma and goalkeeper Lee Grant.

Wayne Hennessey and James Tomkins were restored to the starting line-up but Palace still look vulnerable to speedy attacks. Tomkins and Sakho are Hodgson’s best centre-backs – Scott Dann’s lack of pace on the turn leaves the defence too vulnerable.

But defensive pairing need to build up an understanding. The result could have been very different if Stoke’s goalscorer Xherdan Shaqiri had been more clinical with a first-half one-on-one and if Shawcross had not somehow cleared the Swiss international’s 87th-minute goal-bound effort off the line.

Julian Speroni can consider himself unlucky to have been dropped despite his poor decision-making in the lead up to Everton’s second goal last weekend. He had been solid in the five league matches he played.

Hennessey was solid against Stoke but had little to do.

Then came a stoppage time winner which could be a huge moment in the Eagles’ survival campaign.

Zaha kept the ball alive after his initial cross was blocked. The 25-year-old’s next delivery fell to Yohan Cabaye, the Frenchman’s rebounded effort dropping for Sakho to convert into an empty net.

Sakho did not have his best game in a Palace shirt. But the former Liverpool man’s tackle in the build-up to Zaha’s winning goal against Chelsea in October and his match-winning strike over Stoke could alter the fate of the Eagles’ season.