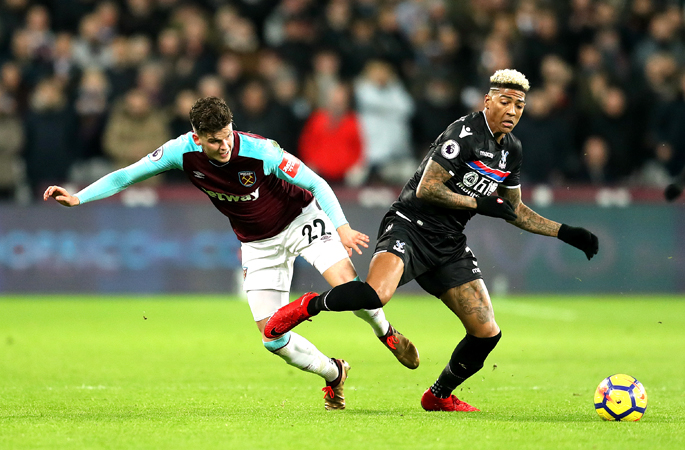 By Conor O’Sullivan at London Stadium

This was a missed opportunity. Crystal Palace gave away the lead in a game where they looked the more threatening side and sat back in the second half to protect a point. Perhaps even both sets of players were more consumed with the looming transfer deadline day as the second half yielded scant entertainment.

The Eagles looked capable of scoring a few goals in the early stages after Christian Benteke claimed his first goal since December. But Palace allowed the hosts back into the game – poor defending led to James Tomkins conceding a penalty that Mark Noble converted. In the end, West Ham showed slightly more ambition and Palace were forced into some good defending to hold out for a draw on a clear and cold night in Stratford.

Given how congested the bottom half of the Premier League is, Roy Hodgson will be content with a point.

The game changed in the space of five minutes when Palace looked in complete control against a lacklustre West Ham side ravaged by injuries. Bakary Sako, so impressive in his recent run in the side, went down under a strong challenge from Pablo Zabaleta on 38 minutes.

Sako left to boos from the home fans as he first hobbled to the sideline and then attempted to re-join the action only to go down again. It was hardly an attempt at timewasting and more the genuine effort of a player desperate to continue what has been the best spell of his entire professional career.

Sako is the Eagles’ top scorer this season with six goals but manager Roy Hodgson has always given the impression that the Malian international was merely cover until suitable replacements could be recruited.

Palace created nothing in the second period. Wilfried Zaha and Andros Townsend were starved of possession in the closing half an hour which in turn completely isolated Benteke.

Benteke doubled his tally for the season with a close-range header in the 24th minute. Townsend displayed his worth with a driving run down the right wing following skipper Luka Milivojevic’s incisive through ball. The ex-Tottenham and Newcastle winger produced a clipped cross that Benteke stuck away from eight yards. These are the types of chances he will bury and perhaps the Belgian can feel aggrieved that the side is not playing to his strengths at present. But two goals from 18 league appearances is a poor return for a striker of his quality.

Palace must show more ambition on Sunday against a Newcastle side made of up of Championship-quality players. Another draw, or an unthinkable defeat, will leave them looking over their shoulders again.