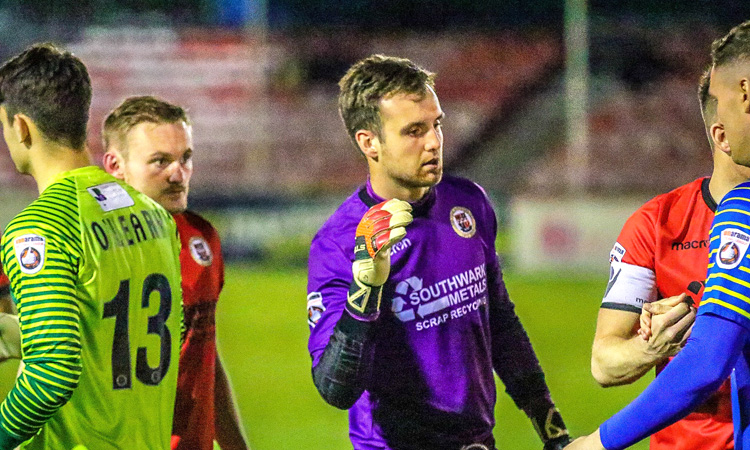 David Gregory reckons his release by Crystal Palace was a positive moment in his career – with the Bromley goalkeeper now set for an FA Trophy final at Wembley.

A season at Cambridge United did not go to plan before Croydon-born Gregory signed for Bromley last summer. The National League club are pushing for the play-offs this season and face Brackley in the FA Trophy final on May 20 after securing a 4-3 aggregate win over Gateshead in the last four.

“I look at leaving Palace as a bit of a blessing,” said Gregory. “I knew as soon as the club went up – as much as I was buzzing about that – that it was going to be a bit of a setback for everybody in the academy set-up.

“It was hard to start with, but it was going to be that little bit harder to break through.

“I grew more and more frustrated in the next couple of years after that, I couldn’t do anything other than go out on loan to non league. I was wasting my own time, more than anything.

“After a long discussion with the goalkeeping coaches at the time the best decision for me and my development was to go out and play.

“I ran into a bit of bad luck at Cambridge that Will Norris was in such good form. He just had a blinder of a year and got his just rewards with a move to Wolves.

“It was another little setback. I was released from Cambridge and couldn’t get any games, where do I go now?

“Coming to Bromley was a no-brainer – a snap decision. As soon as I got release, Bromley expressed an interest and I couldn’t put pen to paper quick enough.

“I’ve got games at Bromley and it has been all green lights from there.”

Gregory was in the stands when Palace won promotion at Wembley in May 2013, Kevin Phillips’ penalty clinching a 1-0 victory over Watford.

Now the Croydon-born shotstopper is poised to have a central role with the Ravens.

“Every kid dreams of playing on the hallowed turf but you never expect it to happen to you,” said Gregory. “As a Palace fan I wanted them to go up but there is a selfish part of you that thinks a couple more years down in the Championship and you might have half a chance of making it.

Gregory still has plenty of playing time ahead of him in a position where goalkeepers do not tend to peak until their late 20s or early 30s.

“My ambition is to play as high as a possibly can,” he said. “I spent a lot of time with Julian Speroni during my time at Palace, from the age of 14 onwards. He was like a guardian angel with his coaching and giving me little bits of advice – how I could do better and managing the game in certain situations.

“He taught me how to be a man before being a footballer, how to treat people and speak to fans – he appreciated people and wanted to engage with them properly.

“It was a dream come true to be at Palace and at the same time it made me want to work harder – my entire family, or the vast majority of it, are all Crystal Palace supporters. A big ambition of mine was to be first choice keeper at a club much family were so heavily involved with. It was a driving influence.”

Brackley are in the National League North, meaning they will be underdogs for the huge tie at Wembley.

“We go into it the higher-ranked side but we know that Brackley have done professional and confident jobs in all their trophy fixtures so far,” said Gregory. “We will give them as much respect as we possibly can and prepare for it how we have done every game this year.

“The most important thing is that everyone involved with the club enjoys the occasion. Hopefully we get the right result.”