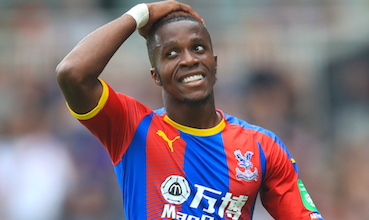 Crystal Palace will be without Wilfried Zaha for their game this afternoon – with the forward missing out due to a groin injury.

It is a blow that has forced boss Roy Hodgson into one of two changes to the Eagles side which lost 2-1 at Watford last Sunday.

Aaron Wan-Bissaka returned from suspension in the 1-0 EFL Cup victory against Swansea in midweek and is preferred ahead of Joel Ward as Premier League action resumes.

Defender James Tomkins is absent due to the groin injury which forced him to pull out of the warm-up at Vicarage Road.