Crystal Palace’s 2017-18 Premier League season was the very definition of a rollercoaster – pointless after seven games and without netting a goal only to stabilise massively following Roy Hodgson’s appointment. SAM SMITH grades the Eagles squad which secured an 11th-place finish.

The Wales international epitomised Palace’s improvement in the second half of the season, claiming the number one role following a poor start to the campaign and a hard-fought battle with Julian Speroni in the early matches under Hodgson. A couple of wonderful saves in the victory against Brighton stand out as his highlights of the season.

Initially regained his place in goal after Hennessey’s poor form, making his first Premier League appearance in over two years in October’s win against Chelsea. Failed to appear after December 28 due to the resurgence of the former Wolves man and several injuries.

The academy graduate was thrown into the first team against Tottenham due to the injury crisis at the start of 2018. Impressed significantly and was faultless for the next five games, but a mistake against Bournemouth on April 7 meant he would make just one more appearance. Won Palace’s Young Player of the Year award and will feature far more next season.

A contender for Player of the Year with some outstanding defensive displays. Formed a formidable partnership with Mamadou Sakho that saw the pair go unbeaten in their 10 Premier League appearances together.

Injury meant he played just half of the Eagles’ Premier League fixtures but the South Londoners defended significantly better when he was in the team. Provides an assurance to the back line with his composure when in possession.

Deputised well for the regular centre-backs when called upon. A versatile back-up option who does not receive enough credit.

A fantastic final few months to the season saw the Dutchman net five goals. One of Palace’s best performers after winning back his place post-January following Jeffrey Schlupp’s injury.

Another contender for Player of the Year having consistently performed incredibly well all season in defensive midfield. Surprisingly the club’s highest scorer with 10 goals, albeit seven were penalties, and his curling long-distance strike against Southampton won Goal of the Season. 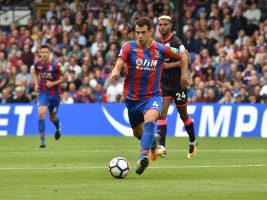 Provided Palace several important goals, limitless energy and ended the campaign impressing in an unnatural right-midfield position. Highlight has to be the added-time winner at home to Watford and the Scot deserves credit for his good form having struggled to find a place in Sam Allardyce’s team the season before.

Key to Palace’s success during the latter stages of the season and formed a fruitful relationship with Milivojevic. The Eagles keep possession far better with the out-of-contract Frenchman in the side and it is imperative that he is retained for next season.

Injury limited the 22-year-old to just 24 league appearances but Palace were markedly better when the on-loan Chelsea man played and could have finished much higher had he featured more. Deployed in a left midfield position for the final months of the season, Loftus-Cheek’s performances were impressive enough to earn him a place in the England World Cup squad.

The club captain failed to make an impact before a cruciate ligament injury unfortunately ended his campaign prematurely on New Year’s Eve. 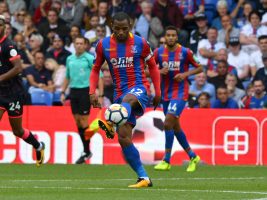 Signed from Ajax as part of De Boer’s Dutch revolution. Initially began the season on the left of a back three but his lack of height worried Hodgson who moved him into midfield. Marked Kevin de Bruyne out of the 0-0 draw with Manchester City on December 31 and it seemed he would be given further opportunities to impress. Started just twice more due to Hodgson’s preference of Cabaye and Milivojevic – deserves more game time next season.

An impressive season for the wideman who ended the campaign playing in a makeshift but effective strike partnership with fellow winger Wilfried Zaha. Provided seven assists – a club-high – and the only gripe is that he should certainly contribute more goals. Played the most league minutes – 3,129.

He tried but nothing came off. His 15 goals the season before arguably kept Palace in the Premier League but a mere three goals this time around simply wasn’t good enough and he eventually lost his place in the side to the Townsend-Zaha strike partnership. Notched five assists – second only to Townsend – and produced a couple of effective cameo appearances in the final few matches. Must improve next season. 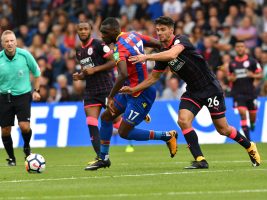 The January signing made just four appearances following his move from Midtjylland but produced enough to suggest he deserved more game time. A hard-working and purposeful centre-forward who – at 22 – has his best days in a Palace shirt ahead of him. Unlucky to have his first Eagles goal chalked off at Chelsea for an alleged foul by Riedewald.

Kickstarted a Palace career that appeared to be dead and buried last summer. Stepped in as a centre-forward when Palace had no fit strikers towards the end of 2017 and netted six goals across all competitions – including a stunning right-footed drive in the FA Cup defeat at Brighton.

The Ivorian’s impact at Selhurst Park is epitomised by the fact that the Eagles lost all nine games that he missed. Naturally a winger but deployed as a striker for the majority of the season, Zaha has excelled under Hodgson and has taken his performances to greater heights – adding the end product that was previously a maligned feature of his game. Will attract interest from several elite clubs this summer but it is in Palace’s best interests to keep him, even if bids exceed £60 million.