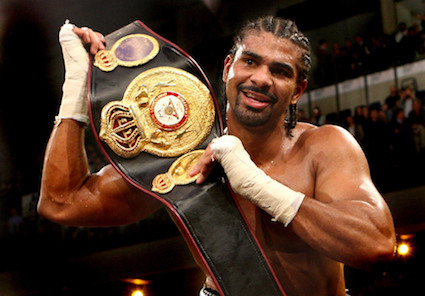 David Haye announced his retirement from boxing this week – and another of South London’s leading heavyweights reckons he will be a tough act for other local fighters to follow.

The 37-year-old’s five-round dismantling at the hands of Tony Bellew last month always felt like the end of his career.

But the Hayemaker allowed over a month to pass before confirming that he had hung up his gloves.

His comeback in 2015 has been a failure – at least in terms of inside the ring – but he did get paid handsomely for his two bouts with Liverpudlian Bellew, the pair providing the kind of needle which ensures a pay-per-view event sells.

But overall, Haye finishes with a career that cannot be sniffed at. His most impressive win? Wrenching the WBC and WBA world titles off Jean-Marc Mormeck in November 2007. That fight in the suburbs of Paris was only picked up for a relative pittance by Irish-based station Setanta Sports. His profile on a national level was still relatively low.

Haye added the WBO belt to his collection with an explosive and brutal demolition of Enzo Maccarinelli the following year. After that came the move up to heavyweight, where he won the WBA world title against the giant Nikolay Valuev, his speed and movement too much for the powerful but plodding Russian. By that point he had become one of British boxing’s biggest names.

The Hayemaker’s last truly big night on the world stage came when he lost a unanimous decision in a unification match against Wladimir Klitchsko on a July night where the rain never stopped falling at Hamburg Football Club’s Imtech Arena.

Haye had a happier night at another soccer stadium – West Ham’s Upton Park – as he knocked out Dereck Chisora in 2012.

After that came retirement and when he returned in 2016 all the talk was that finances – rather than unfinished business – had brought Bermondsey’s star prizefighter back.

Bellew was his litmus test after two of the most gentle of comeback oppositions. His body failed him in the first encounter – just as Bellew was coming on strong – and he was down three times in a sobering fifth-round stoppage when they rematched.

“He was probably the second-best cruiserweight ever, after Evander Holyfield. Like Holyfield, he moved up to heavyweight and won a world title there too.

“It will be very difficult for anyone from South London to surpass what David Haye did, or even to equal it.

“The highlight of his career for me was when he absolutely destroyed Maccarinelli in their unification fight. All the talk was that Enzo would give him a really tough fight, even beat him, but he put in an incredible performance.

“His achievement in going up to heavyweight is amazing. People don’t know it, but when I first met David at the Fitzroy Lodge he was a middleweight.

“But nobody beats time.

“Time caught up with him. It happens to everyone and David is no different.”

Williams is also quick to dismiss the notion that Haye’s legacy has been tarnished by his most recent four fights.

“I don’t really think people look at it like that. You only have to look at the likes of Joe Louis and Muhammad Ali, greats like that. At the end of their careers they boxed more low-class people and even lost to them. Does that take away from them being greats? It shouldn’t take away from what David has done.”

Haye finishes with a record of 28 wins and four defeats. In total he boxed 138 rounds. No-one lasted the distance during his cruiserweight days. Klitschko and Valuev – who enjoyed a major size and weight advantage – both did. His vaunted punching, so devastatingly concussive at cruiserweight, lost some of its potency once he was up against the sport’s biggest men.

Haye released a long statement on Tuesday after confirming his time as a boxer was over.

“Thanks to boxing, I have been able to live my unencumbered childhood dream; a dream my dad, Deron, facilitated the moment he took me to Fitzroy Lodge amateur boxing club as a nervous 10-year-old.

“On reflection, my 16-year, 32-fight professional career was one of two halves.

“In the first eight years, everything ran smoothly. I had 25 fights and became the first ever British boxer to unify the cruiserweight division (WBA, WBC and WBO world championships).

“Lifting that world heavyweight championship meant I’d fulfilled a promise I’d made to my mum, Jane, at the age of three.

“Yet it was in the second half of my career where I really discovered what it meant to fight and be a fighter.

“If I had it my way, I would have fought as many as 16 times in the second half, the last eight years. But, unfortunately, during this time my faulty body only allowed me to step through the ropes on seven occasions – four wins, three losses – and often it was a fight just getting to the ring in one piece.”

Haye revealed that a metal cage with two metal rods were inserted into his back after undergoing spinal surgery 10 months before he came back to the ring in 2016.

“I went into surgery 191 centimetres tall and came out 193 – not a bad silver lining – but literally had to learn to walk again.

“It’s easy to be upbeat and positive when everything in your life is going to plan.

“But experiencing true disappointment, sadness and uncertainty can be the key to unearthing one’s true character. For instance, controlling emotion and desire, showing compassion, and dealing with loss were things I had no real handle on until recently.

“Quick, bread-and-butter counterattacks, the sort I’ve effortlessly thrown since my teenage years, are no longer in my armoury. And when I take shots, they now shake me to my boots.

“Of course, my ego would have loved to have retired on a win, or as a champion. But, deep down, I know my effort on May 5 2018 [against Bellew] was the very best I had left to give. I also know that underwhelming effort revealed the truth about my current abilities in a world-class boxing arena.

“If I could go back in time and give advice to my 21-year-old self, or anyone setting off on their own adventure, I would say this: live in the moment. Don’t only appreciate the good times once they become a memory. The present is the only thing that truly exists, so give it the attention it deserves.

“And just as boxing gave me the chance to make my dreams a reality, I now hope my children do the same in whatever path they choose.

“They know from their father’s story that anything is possible with hard work, dedication and extraordinary sacrifice.”