Looking back at when he left AFC Wimbledon in 2018, Darius Charles is grateful that both parties kept the door open for a possible return.

The defender was influential during his two-and-a-bit seasons with the Dons. When he first arrived on loan from Burton Albion, Charles faultlessly fitted into Neal Ardley’s side, forming a rock-solid partnership at the back with Paul Robinson that resulted in promotion to League One.

His performances didn’t go unnoticed. He made more than 70 appearances for the Dons and was voted by fans into their Team of the Decade at the end of 2019.

His return this summer has been hailed due to the experience and influence he can bring to what is poised to be the youngest team across the whole of the Football League.

“I haven’t been this excited for the start of the season, perhaps ever,” Charles told the South London Press. “The way that Robbo [Mark Robinson, head coach] is doing things at Wimbledon, and in terms of the culture he is building here, is very similar to the one I was a part of at Wycombe.

“From the moment I left Wimbledon, Robbo and I have stayed in touch due to our shared vision and ethos of football.”

Charles’ return to Plough Lane won’t be focused on playing weekly. The 33-year-old physically can’t keep up with the demands of the rigorous schedule of League One football.

But while he may not be able to pull on the Wimbledon shirt as much as he would like, it’s a remarkable achievement considering Charles was told in 2018 that his professional football career was over.

“Towards the end of my time at Wimbledon, I picked up a little injury which I didn’t believe to be too much at the time,” he explained. “When I left the club, I went to Wycombe and had to take a medical, which I failed. Gareth Ainsworth [their manager] told me: “We will get this sorted.”

Going against the results of the medical, Charles signed a one-year deal with the Chairboys. Three days into pre-season training, he broke down, unable to control the insufferable pain coursing through his body – Charles had developed arthritis in his hip.

He spent the next three months going in and out of doctors’ surgeries, having injections and managing the injury as best he could.

“I was in so much pain that I had to stop. When I went back to see the surgeon, he told me: “You have a very bad hip. You have next to no chance of playing at the level you’re currently playing at.” 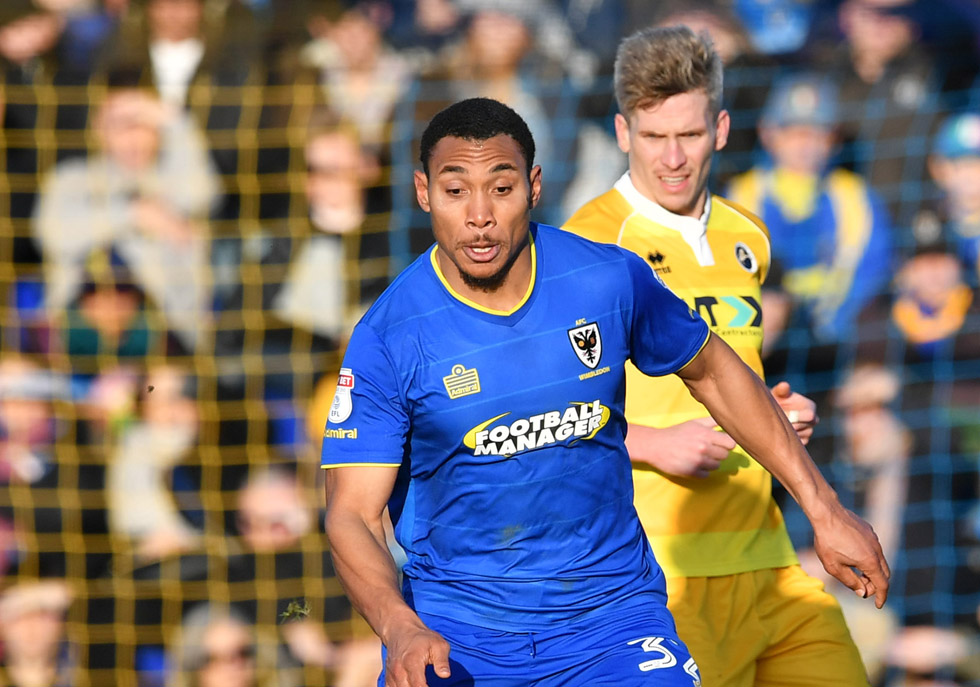 “He told me that he wouldn’t operate because hip surgery is very tricky, and the success rate is extremely low. For my well-being moving forward, he said that it was best for me to stop playing.

“It was very difficult for me at that moment. It took me to a dark place where I contemplated several things – failure for not having done the things I wanted to do. I was feeling sorry for myself. Why me? I have worked so hard for it all to be taken away from me. Do people even love me? How will people see me now that I’m not a footballer anymore?

“It was the thing I had worked towards being for my entire life, and I never had an opportunity to formulate an opinion on who I am outside of football. You attach who you are to what you’re doing at that moment in time – it makes up your whole self-worth and self-esteem.

“I learnt more about myself during that time than I did in the previous 30 years of my life. As difficult as it can be dealing with the day to day challenges of having an arthritic hip, it was serendipitous because I learnt a lot. I like to think that I am a better person for it.”

Charles transformed his life and battled his way back on to the pitch. He turned vegan, saw a mobility specialist and self-isolated away from football to provide a breathing space that allowed him to focus on his injury.

He rejoined Wycombe in 2019, playing 29 times in a season that ended with promotion to the Championship for the first time in the club’s history.

Charles is excited about his new role at Wimbledon.

“I am in a transition period and a different stage of my life,” he says. “The past few seasons, I have played with a lot of anxiety and fear as I am not physically capable of doing things I used to be able to.

“I will be available if needed, but more importantly, I am bringing my experience and mentoring skills to this young side.

“I love the innocence of the group. The older you get and the more games you play, you become more cynical as you have seen so many things.

“The beauty of this sport is that you can be a seasoned pro like me at 33, playing with a lad who is 18, and he plays with bravery, courage and vigour as they haven’t been exposed to so much at the game, but it is beautiful. The blend of experience and youth can create such a successful and exciting experience.”

Due to Wimbledon’s impressive form and the exciting style of play that Robinson implemented right from the start of his tenure, they are early dark horses for a surprise promotion charge.

When asked whether it’s possible, Charles says: ”We don’t know what we can achieve, but I do know that it’s a great time to be involved with the club. I told Robbo that the club has had the ‘Crazy Gang’, and now this will be his version of that.

“We don’t have a name for it yet, and it certainly won’t be anything like the ‘Crazy Gang’, but Robbo is creating the foundations for a club that can become self-sufficient, exciting and a real lure for players.”