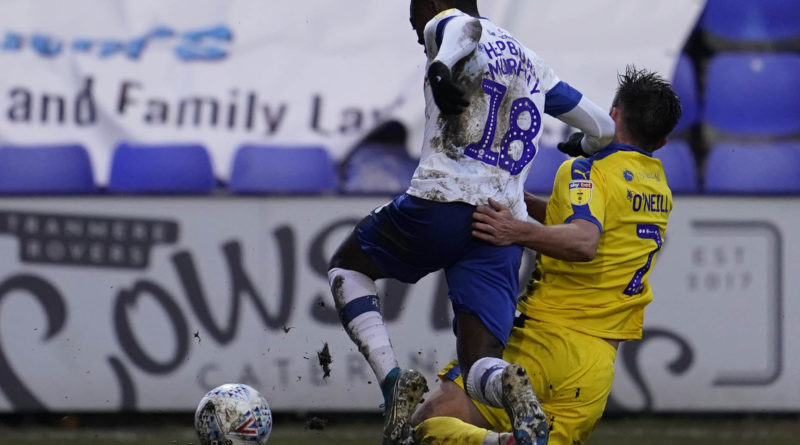 BY DAVE HUNT-JACKSON AT PRENTON PARK

AFC Wimbledon went into Saturday’s game buoyed by the win over Doncaster and with a chance to move six points clear of the League One relegation zone – but instead lost convincingly to a Tranmere side who had not won since November 2.

It was a tough assignment against a Rovers side who had the benefit of being more used to their quagmire of a pitch. What transpired was a poor game between two poor teams on a poor pitch.

The Dons’ first-half performance started very slowly and gradually petered out resulting in as bad an opening 45 minutes as any in what has been season littered with dreadful starts. With both sides lacking in any real quality Tranmere at least looked like they wanted to win with Wimbledon slower to the 50-50 balls and utterly lacking in any attacking intent. That Tranmere only led by Rubian Hepburn-Murphy’s goal at half-time was a testament to just how poor a team they themselves are.

This was undoubtedly the worst half of football that Wimbledon have served up under Glyn Hodges with Tranmere creating chances at will – Morgan Ferrier allowed to run riot. The second-half was better but that is not saying much as the Dons produced a number of telling crosses notably from Nesta Guinness-Walker and Max Sanders yet neither Joe Pigott nor Marcus Forss were quick enough to get on the end of any of them.

At the other end Tranmere continued to carve the visitors defence open at will with Nathan Trott saving one-on-one chances from Neil Danns and Hepburn-Murphy before Connor Jennings smashed an effort off the near post.

What is perhaps most worrying is the prospects for the January transfer window. Ryan Delaney’s loan deal will end and with Marcus Forrs rumoured to be returning to Brentford, AFC Wimbledon will be significantly weakened as the likes of Bolton and Southend are likely to strengthen their squads. Bury’s expulsion, Bolton’s points deduction and a number of very poor teams – Tranmere included – mean there may never be an easier season in which to avoid League One relegation, but on this showing and with no money to even hold their own let alone strengthen in January the South Londoners will have their work cut out if they are to survive with things looking nearly as bleak on field as off it.