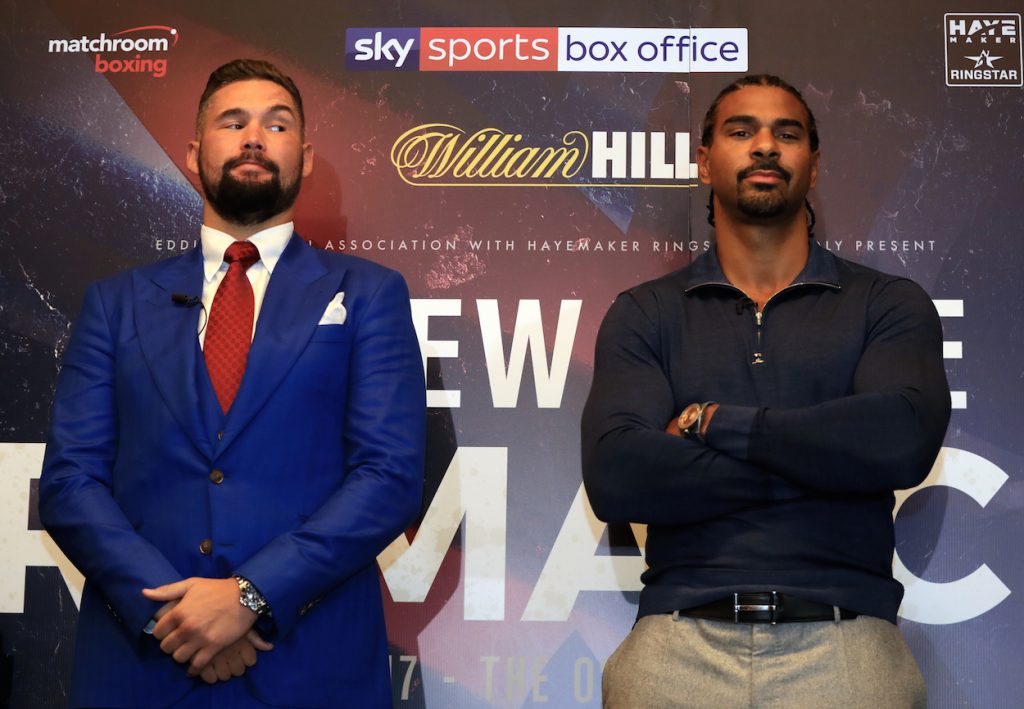 David Haye has postponed his December 17 rematch against Tony Bellew after injuring his bicep in what he describes as a “freak accident”.

The Bermondsey heavyweight was due to try and avenge his defeat to the Liverpudlian at Greenwich’s 02 Arena next month.

But Matchroom Sport – who were due to co-promote the event – released a statement this afternoon saying a new date will be scheduled.

Haye said: “I am devastated to announce my much-anticipated rematch against Tony Bellew has been postponed until March 24 or May 5, subject to scheduling,.

“Despite the recent injury rumours, I was in perfect condition with an incredibly strong training camp, currently weighing lighter than I have for more than five years, I couldn’t wait to get back in the ring. I was ready to rewrite the ending of the Haye Bellew saga.

“Unfortunately, after a freak accident during a stair conditioning session, which I’ve done with no incident hundreds of times, I lost my footing, slipped, so instinctively grabbed the bannister to stop myself toppling down the stairwell, in doing so I somehow managed to damage my bicep in the process.

“This afternoon I underwent a procedure to repair it, this was pretty straightforward and my doctor and physiotherapist have no doubt that not only will I make a full recovery but will be able to be back in the gym to start my arm rehabilitation in two weeks.

“I would like to apologise to Tony, his family and his training team, as well as all our fans who have been left disappointed.  I’ve been solely focussed on this fight and it’s extremely frustrating that I couldn’t finish 2017 with just my ring performance doing the talking. I look forward to getting back to training and into the ring in early 2018 with excitement and determination.”

The Hayemaker has been forced to drop out of fights before including Vitali Klitschko, Tyson Fury and Manuel Charr due to injuries and tore his Achilles in his first meeting with Bellew.

“I’m gutted that the rematch with David has been postponed, both for myself but more for the fans,” said Bellew. “I’ve had a tough camp with a lot going on in my life but was ready to repeat my win from March.

“I’ll get over this disappointment over Christmas with my family and will be straight back into camp for a new date, it’s a big disappointment but as always I leave my career in the hands of Eddie Hearn and Matchroom Boxing who will get me back in there ASAP.”