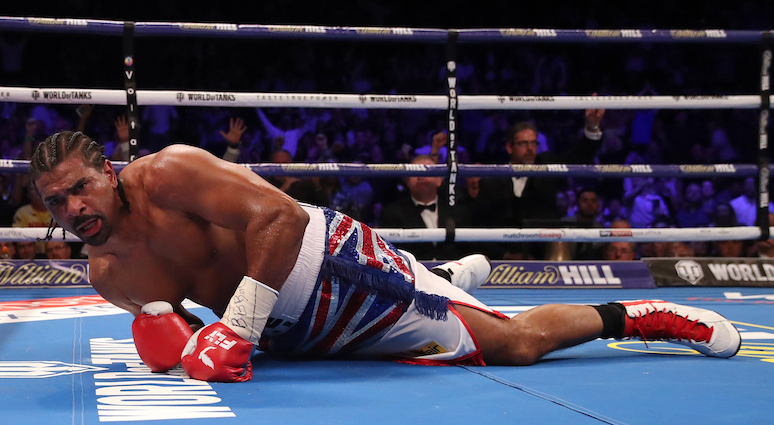 David Haye’s career is over – even if there was no immediate retirement speech after a humbling and ego-shattering defeat to Tony Bellew on Saturday night.

If the Hayemaker does opt to box on, then it will be on a very different financial platform then he has previously enjoyed during a largely stellar career which has seen him win world titles in both the heavyweight and cruiserweight divisions.

Gone are the days of the pay-per-view box office. Gone too will be the kind of huge paycheques he earned from facing the likes of Bellew – twice – Wladimir Klitschko, Audley Harrison, Nikolay Valuev and Dereck Chisora.

There will still be boxers who want to fight Haye, but the question is what he has to gain from that?

Age catches up with every sportsman, and boxing is a brutal sport in terms of highlighting that.

At the weekend it was sad to see Haye, a genuine star of the domestic game from 2007 until 2012, battered around Greenwich’s 02 Arena.

It could have been all over before the fifth round.

Haye was dropped twice in the third round and he was fortunate that the bell rang to give him a minute’s respite. He walked back to his corner on rubbery legs.

That 60 second break was never going to be enough. The former WBA heavyweight king has never been blessed with stamina despite his muscled physique and it was only a matter of when, not if, Bellew caught up with him again.

That moment came in the fifth round. Haye slung out a hopeful hook and got nailed by a textbook left – toppling forward to the canvas.

Although he once again beat the count, referee Howard John Foster waved the contest over.

The main event had been billed as repeat or revenge – the answer was emphatically the former.

Amazingly Haye was once again the betting favourite to prevail. You could make a case that he won the first two rounds – giving nods of approval to his opponent when he absorbed some of his power shots.

But when it unravelled for Haye, it really unravelled. Any composure he had shown at the start – was gone as soon as he made his first trip to the canvas.

Bellew cut Haye down far more quickly than in the first meeting, when the Bermondsey boxer suffered a ruptured Achilles in the sixth round but bravely dug in to last until the 11th when his corner threw in the towel.

Any disputes or debates left over from their March 2017 bout have been ended.

Haye was asked immediately after the fight if he would hang up his gloves. He said: “I don’t know. I’ll have to review the tapes and see what went wrong – but what feels like what went wrong was Tony was better tonight. Tony Bellew fought a great fight – strategic.

“Tony did some really clever stuff and I couldn’t get off.

“Tony was the better man and boxed a great game plan. I couldn’t quite make it happen.

“He’s a great champion and I enjoy the battles. Tony Bellew is definitely my nemesis. He boxed a great fight, I didn’t.

“I hope everybody enjoyed the night. We both put it on the line going for the knockout from the start – no matter how many times we fight there is going to be fireworks.

“It comes to a stage when you have got to let your fists do your talking. I tried to, but it wasn’t good enough. I enjoyed the heat of battle, even if it didn’t go my way.”

Haye has been brilliant at plotting his career, targeting the right opposition. His hit-and-move tactics against Nikolay Valuev to win the WBA title? Exactly what was needed to bring down a giant.

The hype ahead of his defence against Audley Harrison was bought into by many, but was a horrible mismatch.

His loss to Klitchsko saw him struggle to land in a cautious wide points defeat, but he was heavily financially compensated for losing his portion of the heavyweight titles.

Haye’s return had been set up for him to look ferocious – bowling over Mark de Mori and Arnold Gjergjaj without needing to break into a sweat.

American loudmouth Shannon Briggs, who claimed he had a contract to be next in line as the comeback took an upturn in quality, was ditched when a better offer came along.

But Bellew was a rude awakening for Haye. And it has to be said, the Liverpudlian is a highly competent boxer who has grown better and better in recent years.

He had the durability to take Haye’s best shots – those that did land on target instead of wildly missing – and is an under-rated puncher himself with 20 inside-the-distance victories on a fight record which stands at 30-2-1.

Did Haye get it wrong matching himself with Bellew? His bank balance suggests not because the pair both earned lucratively from their two bouts.

But the Liverpudlian’s happiness to get in the trenches, possessing a strong chin and forcing Haye to work at a pace he isn’t comfortable with means that stylistically he was all wrong for him.

Would a peak Haye have fared any better? Those are the kind of questions which are impossible to answer. I’d still wager that Bellew would have been a formidable opponent at any stage of his 16-year career.

But the one thing I would say is that Haye’s lack of rounds – let alone fights – since he first retired in July 2012 was never going to help him. That is before you throw into the mix the number of injuries he has sustained in recent years, damaging his bicep at the end of 2017 to shunt the Bellew rematch into May.

Haye will be remembered as one of the greatest boxers to come out of South London, and probably even top in terms of the excitement and drama he dished out. There isn’t anybody yet who looks set to come through and fill the void locally, unless Dillian Whyte finally secures that world title shot.

The Hayemaker’s victory in the Paris suburbs against Jean-Marc Mormeck to claim the WBC cruiserweight title was superb. And he followed that up with an obliteration of Enzo Maccarinelli to add the WBO strap to his collection.

He had the devastating power in that weight class to dominate, but instead chose to step up and face the biggest the sport had to offer – and where the financial rewards were so much greater.

Haye should have no regrets about his career. The only regret will be if he opts to box on and put both his reputation – and potentially his health – at stake.