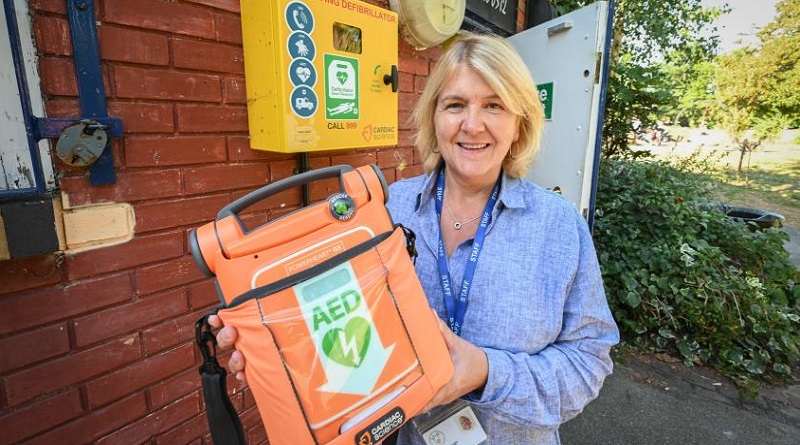 Quick-thinking charity workers leapt to the aid of a dangerously-ill mother who collapsed in a Fulham park – and saved her life, thanks to a new, publicly accessible defibrillator.

‘Rescue ready’ defibrillators were installed by Hammersmith and Fulham council in six of its parks at the start of the summer, to improve safety for visitors.

And the move has been a life-saving one, after the equipment in William Parnell Park at Sands End, was put into action last week by Julie Cavanagh, manager of the childcare group Sands End Associated Projects in Action, and her colleague, Neda.

“A mum had come in to our building to pick her child up and just said ‘I don’t feel well’, and said she felt a bit sick, then she just collapsed,” said Ms Cavanagh.

At first, they thought the mother had fainted, but when Neda realised she wasn’t breathing they called 999, where operators asked if they had a defibrillator nearby.

“Luckily the new defibrillator was on our building. We put the pads on her chest and then just followed the on-screen instructions, which said to give her CPR, and it counts it all out for you,” said Julie, “It was a team effort.”

The pair were soon joined by a first-responder who took over, and the woman soon regained consciousness and was later whisked off to hospital, where she is still recovering.

Ms Cavanagh added: “She told us doctors at the hospital said our actions helped save her life.

“You know it [the defibrillator] is there, but you never think you’re going to have to use it.

When it first got put up there you think ‘What if something happens?’ But now we’ve got more confidence to know you can use it and it is really, really easy.

“It was a scary situation but a really good outcome, thanks to having the defibrillator there.”

“Quick-thinking by Julie and Neda has saved a life, and that’s a wonderful thing,” said Councillor Wesley Harcourt, Hammersmith and Fulham cabinet member for Environment.

The saving of that life makes every penny spent on these defibrillators worthwhile. We wish the mother a speedy recovery.”

Recently, 15 of the authority’s parks were awarded Green Flag status, showcasing them as being among the very best for facilities, foliage and links with the community.