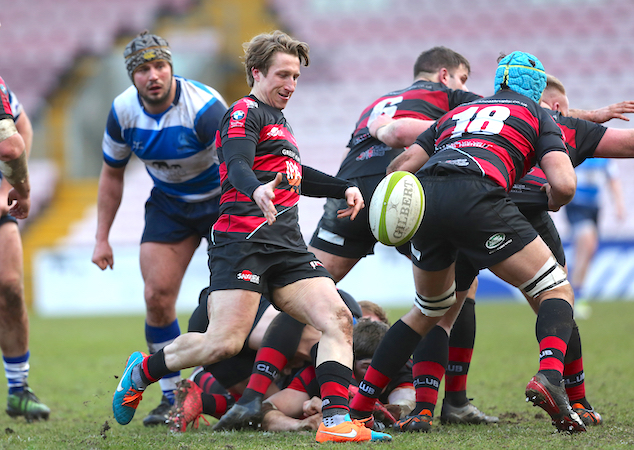 More Sport
13 February 2018 Sports Reporter 0 Comments
DARLINGTON 33
BLACKHEATH 19
BY GRAHAM COX AT THE NORTHERN ECHO ARENA
So often a match can turn on a single moment.
On the hour mark of this closely-fought contest, Club full-back Leo Fielding made a last-ditch tackle which, with a man available outside, denied Mowden Park an almost certain try.
But referee Matt Turvey deemed the tackle dangerous and, with Blackheath temporally depleted in number, the hosts, who had looked throughout to put width on the game, fully exploited the extra space to score the two tries that extended a two-point advantage to 14.
Fly-half Warren Seals went over for a converted score on 63 minutes from line-out ball midway inside the Blackheath half of the field, followed soon after by Callum MacKenzie, the left-wing crossing for his second try and Mowden’s fourth, after the visitors simply ran out of tacklers after another throw from the touch-line.
It was a pity for Blackheath who had done so well to fight back from an early deficit against the side lying second in National League One and who remain unbeaten at their Northern Echo Arena fortress in their 11 home games to date.
Mowden centre Garry Law struck a fine conversion from out wide, to add to an early penalty after right-wing Adam Radwan had broken tackles down the right touch-line, giving the hosts a 10-0 advantage on 12 minutes. Joe Tarrant put Jake Lloyd through the midfield to cut the deficit to five points at the end of the first quarter.
Law’s second penalty extended the hosts’ lead again, but with Hayden King and Danny Herriott giving Mowden a torrid time at the scrum, a five-metre set-piece prior to the interval saw Tom Stradwick drive over at close-range to bring the visitors to within a single point.
Mowden’s decision to opt for line-ball instead of an easy three points after the restart was fully vindicated as MacKenzie squeezed over next to the left corner flag, moving the north-easterners to a 18-12 lead, but as Freddie Owen was adjudged held up across the goal-line, the Club’s still solid scrum set the platform for Lloyd to crash over for his second try, Tarrant’s conversion nudging Blackheath ahead for the first and only time.

Law’s third penalty, as Blackheath were penalised for going off-side in front of the kicker, restored the lead for the hosts, and although Owen was unlucky a second time when ruled not to have touched down after the open-side hacked on following a fumble in the Mowden defence, the two-try burst put the hosts clear with only 11 minutes remaining.

Still, a further try would have given some reward, and for the final minutes Blackheath threw everything at the Mowden goal-line  but to no avail.
Blackheath return to Well Hall for the visit of Esher.  Kick-off is at 3pm.