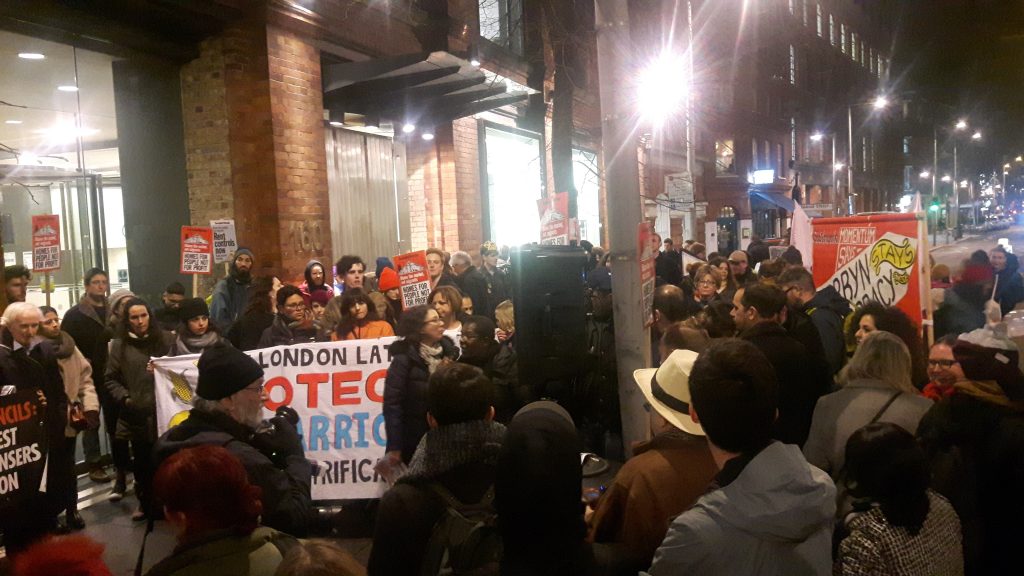 But campaigners who successfully blocked Delancey’s original plans for the Elephant & Castle have vowed to battle on in a bid to make sure the scheme benefits local people.

They had objected to the small amount of affordable housing, the possible decimation of traders’ livelihoods – particularly Latin American ones – and the end of the Palace Bingo Hall there.

Now Delancey has offered to make an extra block in Oswin Street social housing. It had stipulated 74 flats at social rent, but will now offer a further 42 flats from London Living Rent to Social Rent within Block W3 of Oswin Street mansion properties, pending resolution of grant funding and/or final viability review.

If this is agreed, it would make 35 per cent of the flats affordable. It would depend on the company receiving grants to bridge “a further viability gap” if this change is agreed.

Delancey is also offering 50,000 sq ft of leisure use to a bingo operation, after talks with Palace Bingo managing director Patrick Duffy.

Delancey investment director Stafford Lancaster said in a letter to Southwark chief executive Eleanor Kelly this week: “We are moving towards revised proposals which seek to deliver one third of the affordable housing at social rents, provide more tangible relocation plans for traders and prioritise bingo plus wider community leisure use.

“This is in response to the various issues raised by the local community and planning committee, council leaders and ward councillors and the constructive dialogue with them since January 16.

“There appears to be a strong consensus that these regeneration proposals are most welcome. This is a significant achievement given the scale and complexity of the project.

“We believe the issues are resolvable. But time does remain very much of the essence if we are to deliver.”

He also mentioned the prospect of an expensive and lengthy appeal if the parties could not agree, saying: “There is clearly the prospect of an outcome where we are forced to proceed to a lengthy, costly and damaging third party process that would most likely deliver our current plans.

“However, there is also the potential for a different outcome which might deliver even more benefits for all.”

In its original plans, Delancey had offered 342 flats at discount market rent (DMR) with half of them being at or below the London Living Rent and 10 per cent social equivalent rent.

But council officers had said in the report to committee: “This does not address affordable housing requirements. There is no traditional social rented accommodation.”

Tanya Murat, from Southwark Defend Council Housing, said: “We are delighted that the council failed to approve this destructive development. Delancey’s proposed revisions are a step forward. But they’ve only moved this much because of the overwhelming opposition shown by our community – so we are determined to carry on fighting to secure development that benefits local people, not rich investors.”

Up to 200 people demonstrated outside Southwark town hall in the run-up to a planning committee meeting which deferred a final decision on the whole project for a month.

Marian Roberts, of Southwark Momentum, said at the demo: “It is upsetting to see a Labour council supporting this kind of plan. But Labour is changing.

“Many of us want to see more council housing built in London.”

Students of the London College of Communication (LCC) are one week into an occupation of its reception area, and Rahul Patel, of the employees’ union, said: “They have thrown us a few crumbs. We want concrete assurances of a ballot of local people to see how they want the area developed.

“Students have stuck it out for a week. They want social housing, not greedy property developers. LCC sits on prime land. But it has workers who cannot afford to live nearby because they are only paid the minimum wage.”

A spokesman from Delancey said: “We welcome Southwark council’s decision to defer the decision of our planning application. Our proposals offer a once-in-a-lifetime opportunity to deliver essential regeneration to a key London location, which will bring almost 1,000 new homes to a site where none currently exist, desperately needed new transport infrastructure with a new Northern line entrance and ticket hall, and ensure London College of Communication, UAL’s long-term future in Elephant and Castle.

“We recognise that concerns have been raised about our proposals, and this extra time will give us the opportunity for these to be addressed.

“The issues are resolvable if all parties continue to engage in this positive and constructive manner. We will continue our work with Cathedrals and East Walworth ward councillors, Southwark council and other interested local parties to reach a mutually acceptable and positive conclusion.”