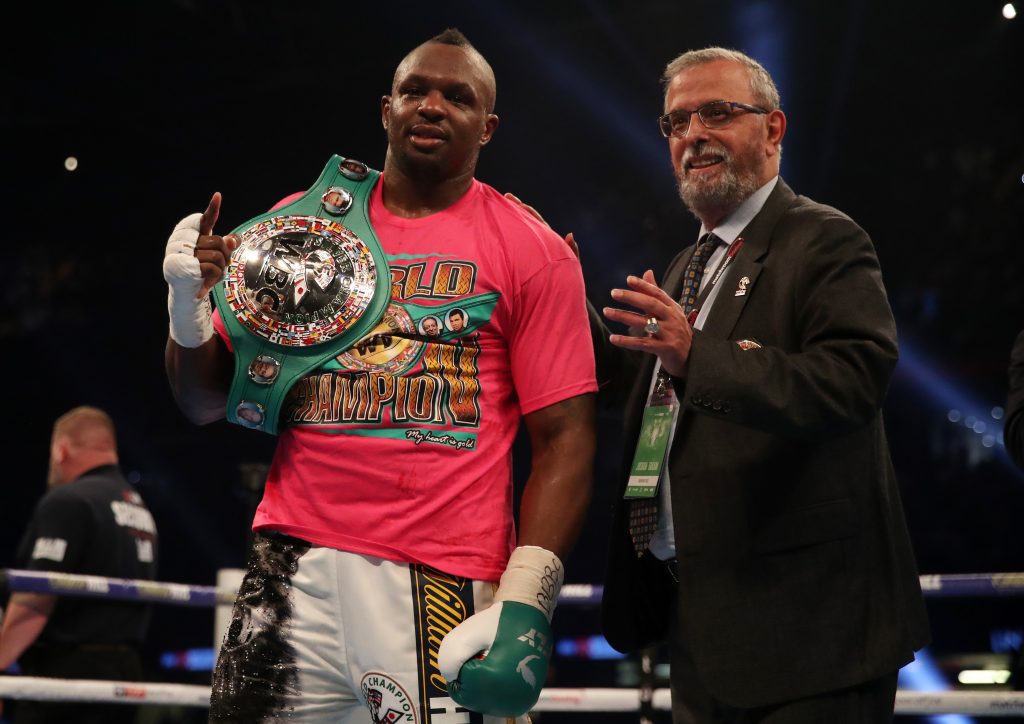 Dillian Whyte will headline at Greenwich’s 02 Arena on February 3 – and admits that Saturday’s wide unanimous points win over Robert Helenius could help lure Deontay Wilder to the UK.

The 29-year-old from Brixton moved his record to 22-1 as all three judges made him a clear winner at Cardiff’s Principality Stadium.

Whyte also won the WBC silver heavyweight title, strengthening his claim for a shot at Wilder, who is that boxing organisation’s world champion.

But “The Body Snatcher” was unable to provide an explosive finish against 6ft 8ins-tall Helenius (25-2) in a bout that failed to quicken the pulse.

Whyte’s promoter Eddie Hearn is hoping to secure a clash with American Wilder for that confirmed date he has at the 02 Arena early in 2018.

“He [Wilder] might have thought that Dillian Whyte is no threat – it might make him more inclined to take the fight,” said the South Londoner. “Deontay Wilder will stand there and throw. He’s not a good boxer. He won’t be able to move around the ring as well as Helenius.

“As you could see, he just wanted to stand up at the end of 12 rounds. He got a loss but didn’t get knocked out. He can fight another prospect. He’ll beat a lot of guys.

“He said he’s a Viking but he didn’t show any Viking heart in there. He didn’t want to get beaten up. He got his money and got home to his family with his nose still straight – he won’t have scared his kids.

“It was a very nice learning fight. I’m fighting at world level with English level experience. As the fights go on you can see I’m learning. Better an ugly win than a pretty loss.”

Whyte’s preparation for the bout was not aided by his opponent only secured shortly before the Matchroom Sport show – headline by Anthony Joshua defending his world titles against Carlos Takam.

“I was sparring guys in my training camp who were 5ft 11ins, 5ft 10ins and southpaws,” explained Whyte. “I didn’t know who I was fighting until two weeks ago. We had Charles Martin, Lucas Browne, Robert Helenius and Carlos Takam.

“But me and my team kept our mental focus. This could have been a potential banana skin.”

Hearn’s job is to secure Whyte a crack at Wilder on home soil. The Alabama-born knockout artist – with 37 early nights in a perfect 38-0 record – rematches Bermane Stiverne in Brooklyn this weekend.

“It was a good performance from Dillian,” said Hearn. “He will admit as well it was not a blockbusting one, but you might end up working it to your advantage.

“If Deontay Wilder will travel it is a very easy fight to be made – February 3 for the WBC title at the 02. It opens up the division.

“We’d go to America but he [Wilder] can’t make money in America. We’ll pay him double the money coming to London.

“I would expect the IBF to call a final eliminator between Dillian and probably Jarrell Miller, if he beats Mariusz Wach. That will become the next mandatory [for Joshua] due about September time.

“We want the biggest fight out there. Outside of AJ that is Deontay Wilder.

“The priority is to get a world title shot – that’s number one. If we can’t get that we’ll look at other options. Dereck Chisora is definitely one of those options.”

Whyte’s only loss was a thrilling scrap with Joshua in December 2015 for the Commonwealth and British belts. Both men have developed as fighters since then.

“The plan is to make that a unification fight,” said Hearn, who also promotes Joshua. “It is a fight we want to grow. But definitely in 2018 if he [Whyte] hasn’t had a shot at a world title and he is mandatory challenger there is no reason it can’t happen.

“We know it is a fight the British public want to see.”