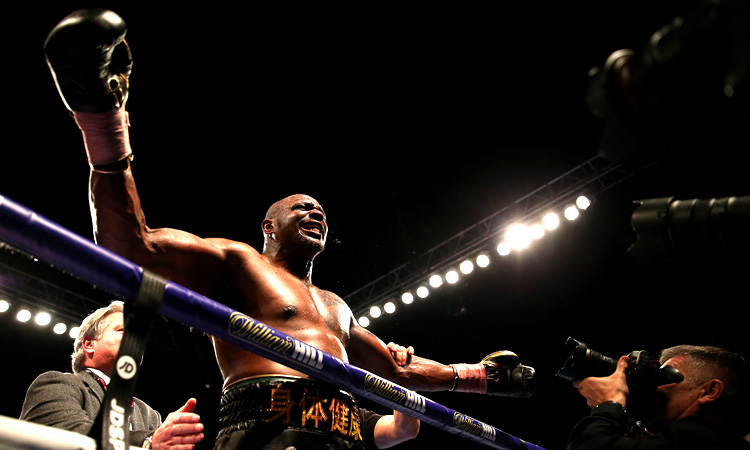 Dillian Whyte produced the biggest win of his career last Saturday at Greenwich’s 02 Arena – and now it is a waiting game to see how the pieces of the heavyweight jigsaw come together.

Boxing is a political sport, not aided by the multitude of boxing organisations and belts.

So it still isn’t clear if Whyte will get his favoured outcome of a crack at WBC world heavyweight champion Deontay Wilder – setting up the winner for a showdown with Anthony Joshua.

Joshua will hold the WBA, IBF and WBO belts if he dispatches Joseph Parker in Cardiff tomorrow night.

If the New Zealander produced an upset victory, then any plans are torn up.

But what Whyte did last weekend was win, and win very impressively. That was crucial after his dull but clear points success over Robert Helenius in October. He needed an explosive performance, especially with US TV network HBO screening the fight.

Whyte needed to look good and provide some fireworks. That is exactly what he delivered against Lucas Browne.

The Australian arrived in the UK with a 25-0 record and the reputation of being a dangerous puncher. But he ended up face down on the canvas in the sixth round after a clinical pummelling from Whyte.

Browne was made to measure for the South Londoner. He plodded forward but lacked both the speed and boxing skills to land his swinging punches, which could hardly have been more telegraphed.

Whyte had success from the opening bell as he landed to head and body, more than once halting his shaven-skulled opponent in his tracks.

Browne, covered in tattoos, looked more like a nightclub bouncer than a highly-trained pugilist and fought with a major lack of finesse. He was cut above his left eye in the second round with more punishment leaving his nose spurting blood by the fourth round.

Watching from ringside, it began to feel a little uncomfortable watching the one-sided beating being inflicted.

Whyte displayed patience and punch selection as he gradually broke down Browne.

The finish was quality. A short left hook detonated on the jaw of the fatigued and battered Australian, who toppled to the canvas 38 seconds into the sixth round. Referee Ian John-Lewis wisely opted not to start a count. Browne needed medical attention in the ring before being taken to hospital for a precautionary check-up.

“A lot of people underestimated me – we’re going to see who is underestimating me now,” said Whyte, who scored his 17th KO in a fight record standing at 23 wins and one loss, to Joshua in December 2015.

“I did what I had to do – boxed well and closed the show in style.

“My left hook is back. I had major shoulder surgery but now I have enough confidence to throw it.

“There was a lot at stake on Saturday. It was my second time fighting at the 02 [he lost there to Joshua] and I want to make it my home. I want to have some great nights and for it be sold out. There was a lot of pressure, a lot of things in the pipeline depending on me looking good.”

Whyte’s promoter Eddie Hearn is trying to secure the shot at Wilder, who is set to be in Wales this weekend to spice up talk of a unification with Joshua. But Whyte, also due to be at the Principality Stadium, continues to be an irritant for the American knockout specialist.

What would take away some of the control that Wilder enjoys is if WBC president Mauricio Sulaiman makes Whyte his mandatory challenger. Then he would have to make a defence against the Brixton man within a specified timeframe or be stripped.

“Before Saturday the one person broadcasters wanted Wilder to fight was AJ,” said Hearn. “Now there are two people they want him to fight – AJ and Dillian Whyte.

“All Wilder is doing is waiting on AJ, but he doesn’t have to. We can still do that but he can fight Dillian Whyte in a career-high payday. If he does beat Dillian then wow, the Joshua fight becomes astronomical.

“I think Dillian versus Wilder here is monster.”