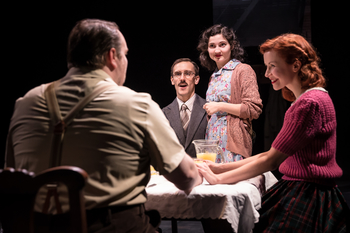 Nationalism, extremism, espionage, witch hunts – these are all epithets for society today.

Yet look back 60 years and these words were just as evocative, conjuring up McCarthyist fear, national distrust and swathes of people dying for their convictions.

In 1953, US citizens Julius and Ethel Rosenberg were executed for conspiring to pass atomic secrets to Russia, having been named to the authorities by Ethel’s brother David Greenglass.

Husband and wife refused to confess to the FBI, staunchly maintaining their innocence until finally, three years after their arrest, the two were led to the electric chair. Their final moments together were immortalised when a photographer captured the couple’s last passionate embrace in the back of a police van – the Rosenberg kiss.

Here in the Southwark Playhouse, director Joe Harmston transports us to the imagined world of these cult heroes/villains. In his production of James Phillips’s 2006 play The Rubenstein Kiss, Harmston’s excellent cast offer a glimpse of how the Rosenbergs – now Rubensteins – might have lived, and invite the audience to issue our own verdicts on the couple’s motives and legacy.

The action begins in 1975 in a New York gallery, where a young man and woman first meet. Anna (played by Katie Eldridge) is an unreserved history teacher who views the past with a proud lack of nostalgia. Matthew (Dario Coates) is an idealistic law student, who listens happily to his new friend’s dissection of the surrounding art. He flirtily teases her as she analyses a portrait of Marilyn Monroe, explaining the famous bombshell’s relationship with her “made-up dad” Clark Gable, but pricks up defensively when she turns to a different picture: The Rubenstein Kiss. “They were innocent, they did nothing wrong,” he says, ending the subject.

Yet, the subject has only just begun. We are swiftly taken back to the 1940s, where the set, unchanged, transforms into the flat of a young couple. Esther Rubenstein lays a white cloth on the central oak table and sings Un Bel Dì, ‘One fine Day’ – an aria from Puccini’s Madame Butterfly.

From here, Phillips takes us on a psychological journey through time, not space. The set, designed by Harmston and Sean Cavanagh, is sparse and symmetrical, configured more like a courtroom than a theatre. The props are minimalist and consistent throughout, meaning that scene changes largely rely on Matthew Buggs’ ominous crackling soundscapes and Mark Roberstson’s flickering lights. The focus is more on character than context. Are we in 20th Century America, are we in Brexit Britain? It doesn’t really matter. What matters are notions of truth, memory, treachery and notoriety, and what we the audience make of them.

Ruby Bentall and Henry Proffit are striking as Rosenburg doppelgängers Esther and Jakob Rubenstein, while Sean Rigby plays Esther’s brother David with burdened poise. Eva-Jane Willis carries the ambiguous character of David’s wife Rachel with carefully balanced strength and vulnerability, and Stephen Billington is every bit the smooth-talking FBI agent. Special credit must be paid to Katie Eldred who, as Anna, has made her professional theatre debut. She is mature and bold in her portrayal of the tortured historian, and shows promise for a very bright future on the stage.

“Hope for the future” is what Jakob clings to, a dream that everything will “work out” in the end. At a time of political, cultural and economic uncertainty, it’s a hope that’s never rung truer.