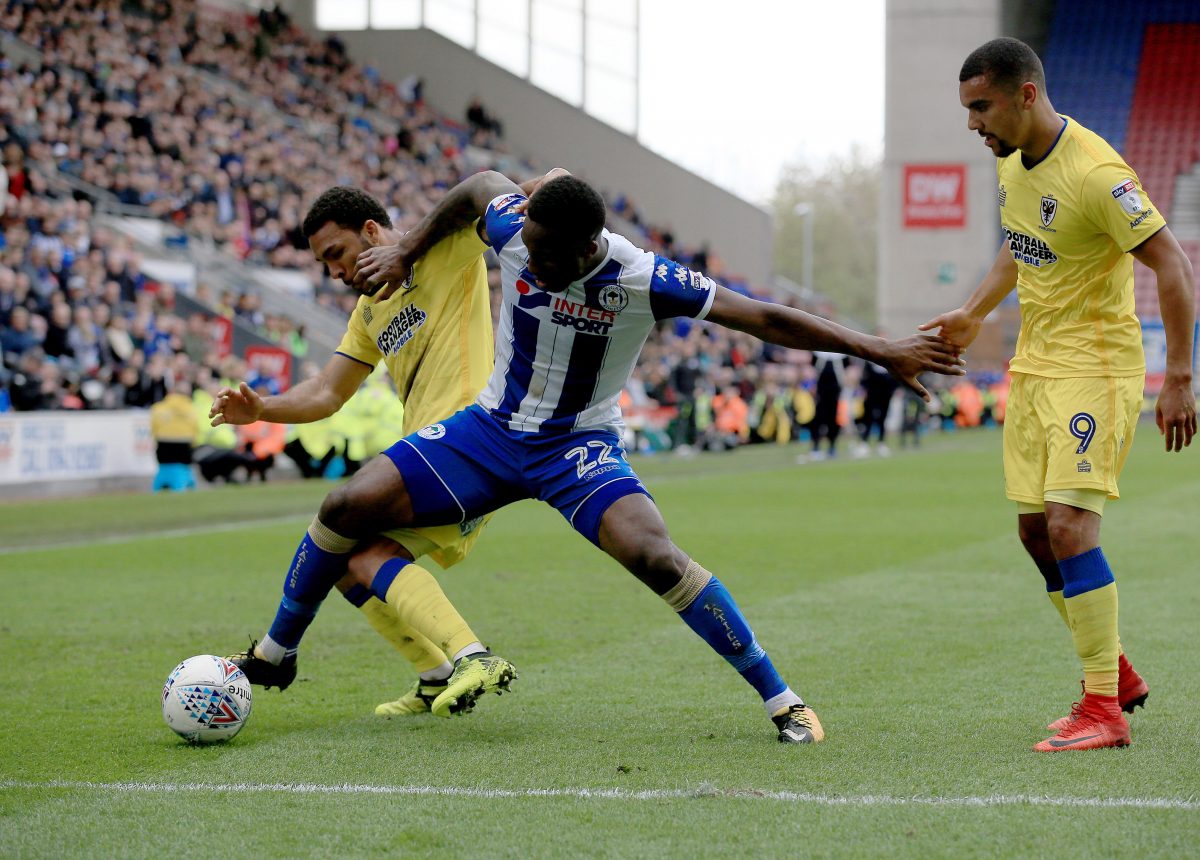 By Dave Hunt-Jackson at DW Stadium

The EFL League One title trophy made an unnecessary trip to Wigan on Saturday as AFC Wimbledon emulated their party-pooping forebears and grabbed a shock point against the league leaders.

With Blackburn losing at Charlton Athletic, the Latics would have been champions if they had secured a win – but instead had referee Andy Woolmer to thank for preventing the Dons taking all three points.

Had Woolmer, who was poor all match, spotted a blatant shove by Will Grigg on Deji Oshilaja in the build up to the home side’s equaliser then Neal Ardley’s side could have assured their survival there and then. Instead they need a point from either tonight’s trip to Doncaster Rovers or from the season finale at home to relegated Bury.

With a number of injuries – plus a very late change with Tom Soares not able to take his listed place in the starting line-up – it was a makeshift side that Ardley put out against a team that had triumphed 4-0 in the reverse fixture.

The Dons chief will have been delighted with the effort and commitment of his charges and no doubt with the fine link-up play that saw them earn a deserved lead in the 24th minute.

Lyle Taylor twice won the ball in midfield before feeding the ever-improving Joe Pigott, who calmly dispatched his fifth goal since joining in January and sent the 661 Wimbledon fans – including 14 Taylor lookalikes in blond wigs – into raptures.

Had Christian Walton in the Wigan goal not pulled off a stunning save to deny Dean Parrett four minutes later then the visitors could have been out of sight.

As it was Wigan eventually found their table-topping form and laid siege to the South Londoners’ goal for most of the second half but found George Long in outstanding form.

The Sheffield United loanee pulled off two ridiculous saves in barely a minute to deny first Ryan Colclough and then Will Grigg in an increasingly frenetic finale.

Ardley was missing the trio of Soares, Jimmy Abdou and Liam Trotter, often his first-choice midfield trio, and went into arguably the toughest game of the season with the much more attacking combination of Harry Forrester, Parrett – again outstanding – and Jon Meades. That his side came away with a highly-creditable display and invaluable point will hopefully be food for thought going into both the final throes of the season and what will likely be a very busy and absolutely crucial summer transfer window.

Not only were the Dons able – just about – to keep there opponents at bay but they always carried a threat of scoring that kept the Wigan defence on high alert.

What a contrast to those defensive displays throughout the season where they could barely, if at all, muster a single shot on target.

Surely recent results and the form of Parrett in particular point the way to a more positive brand of football going forward?

With Meades limping off and George Francomb missing along with Trotter, Abdou, Soares and long-term absentees Anthony Hartigan, Will Nightingale and Cody McDonald, Wimbledon will hope they can patch together enough of a squad for the two remaining fixtures.

But they will believe if they can hold the best side in the division – who had everything to play for – then they will surely be good enough coming up against mid-table and rock-bottom opposition for whom the season is already effectively over.