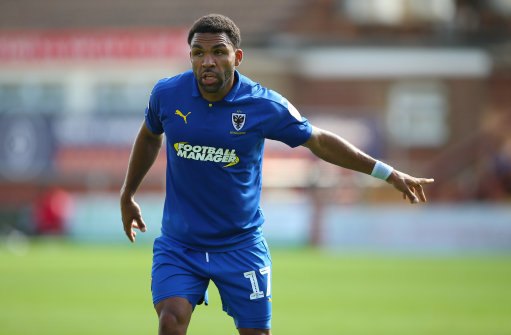 Seven days after an opening day win at Fleetwood Town, Neal Ardley named an unchanged starting eleven with just one change on the bench as Rod McDonald took the place of Toby Sibbick, who had picked up an injury in training.

With both management and supporters in buoyant mood prior to the match there was a sense of the inevitability of the 0-0 draw. However, this was an exciting game full of great play, incident, some good, some bad and controversy too. What is not to like? If the season is like this throughout, then everyone will go home happy.

Word had been that Coventry were a tad unlucky with their opening day defeat – first game nerves perhaps? They were backed by almost 800 very loud supporters, enjoying their first promotion season in 51 years. Those supporters identified with Dons fans, since they too had lost their home stadium and went on some travels before heading back to Coventry and now within one as a tenant of rugby club Wasps.

Rugby and football are strange bedfellows, but so far it appears to be working.

Wimbledon fans were not only treated to a new look side, but also had to get to grips with a new ticket access system, as the club embraces more of the digital route. Supporters were encouraged to come early to the stadium, and numbers gathering appeared well up on previous matches. The fine weather helped, and there was much animated discussion about the new players, who had performed so well on the Fylde coast in the 1-0 win.

The club shop did a brisk trade and there seemed to be a lot of Mitch Pinnock appearing on the backs of shirts. Not surprising really as the Dover recruit has added much to the team with his wing play, ball crossing, free kick taking and some very accurate corners too. He also delivers long throw – not seen much on Saturday.

In every sense, each time he has the ball, supporters expect something positive to happen; and it does.

Interestingly his opposite number Andy Barcham, who always starts the season well has raised his own game a notch too. A well deserved Man of the Match award was great to see.

What this means is that both flanks now deliver a positive threat whereas last season, it was one or the other.

That has given lots of licence to two midfielders to take on a new role.

Tom Soares and Liam Trotter look like players with confidence aplenty, and their interceptions, crisp passing and availability to receive the ball from team mates kept the tempo high.

The defence looked ever more solid with captain Deji Oshilaja alongside Will Nightingale ruling the central area both in the air and on the ground. Right back Tennai Watson, completed his defensive duties with some style, but getting forward on over laps and adding crosses to his repertoire and on the opposite side Ben Purrington had time to do what he had to do and some in reserve, supporting midfield as and when.

This meant that forwards Joe Pigott and Kwesi Appiah were given plenty of openings, and Coventry keeper Liam O’Brien had to be so alert and without a doubt kept them in the game.

The one time he was beaten the post came to the rescue after a delightful move from one end of the pitch to the other, which saw Pinnock dispatch a cross to the far post and Kwesi Appiah rise majestically, but his header bounced off the post.

That was one of four great chances he had in the match. Another saw him turn his man and be brought down in the penalty box. Penalty appeals were waved away. He headed over from another Pinnock dlivery, too. He also saw the keeper save a full blooded shot, which was destined for the top corner.

Appiah looks lively, but as he said post-match, he is eager to open his scoring account for the season. It will happen very soon.

Pigott, who was the hero the previous week had a couple of good openings, but he had fewer clear chances, and maybe Ardley has to consider a slightly different approach when the opposition seeks to man mark a key player?

Let’s be clear here that Coventry were not at the stadium to simply make up numbers, and they had a period in the second half, when they dominated play and Dons keeper Tom King was called upon to make a super one handed save, when it looked likely they were about to make the breakthrough. That though was their only real chance, and soon after a raft of changes, Wimbledon took control again.

James Hanson replaced Pigott and the team went more direct. The referee, though, felt Hanson was often fouling and that caused a degree of frustration.

That frustration reached a pinnacle in stoppage time, when a swift move from defence to attack, saw another substitute, Scott Wagstaff, break into the box and look to pick up a fine Tennai Watson pass, but was upended by Junior Brown and amid wild and loud penalty claims, the referee simply waved away claims – again

Players were unhappy as was boss Neal Ardley, who like many had seen video footage soon after game and it was clear to all that a penalty should have been awarded.

The decision cannot be changed. Who would love VAR now?

Now Wimbledon move to the South Coast for a League Cup tie away to Portsmouth and discover whether the fabled second round does exist.