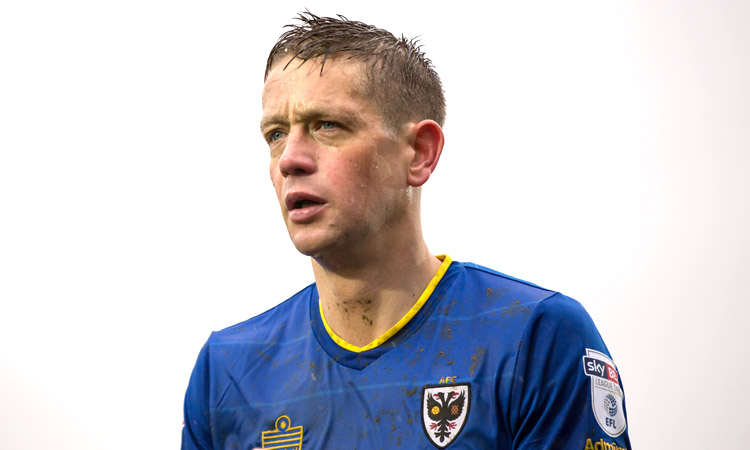 Paul Robinson’s first experience of playing up front was against tomorrow’s opponents Scunthorpe.

The Dons’ central defender performed the same emergency role in 2009 as Millwall attempted to overturn a one-goal deficit in the dying minutes of the play-off final at Wembley.

It didn’t work. But a year later he did score the goal which promoted Millwall at the same venue.

AFC Wimbledon manager Neal Ardley put him up there to be a target in the closing stages of the 1-0 home defeat by Fleetwood on GoodFriday.

But Robinson did not feel it worked as he would have hoped.

But his experience of relegation with Millwall in 2006 means he knows what is required.

“These are times you need to be mentally strong,” he said. “You must keep believing and your performances have to be strong.

“We had chances against Fleetwood and played well against Shrewsbury.

“It is just a matter of getting over the line in games. We have to approach each game with a new mindset and battle as hard as we can every time.

“You do look at the table. You can’t help yourself. People do assess the effect of results after the event.

“The bottom line, though, is that we just need to get a certain number of points on the board. The table does not matter if we play like we can.

“Our tally is all we need to focus on. Other results are immaterial. If we get the points, the table will take care of itself.”

Robinson has lost his place to rising star Will Nightingale, who reminds this reporter of the former Lions captain when he first broke into the Den team 15 years ago.

“He has a bright future,” said Robinson. “He has been unlucky with injuries. But he is homegrown, so the fans identify with him. Now he just needs regular games. Yes, it has cost me my place, but he took his opportunity with both hands.

“I always felt that might happen as I got older – that others would step up and take it on.

And that can sometimes involve playing up front.

“Ian Holloway put me there at Blackpool in the last 10 minutes of a 1-0 defeat for Millwall,” revealed Robinson. “I also went there against Southampton one year. It has always been an emergency measure to try and get something at set-pieces.

“The other guys on the bench were Andy Barcham and Lloyd Sam, who would not have been able to run with the ball in the conditions. So maybe I could have affected things, for example at set-pieces. But it didn’t turn out like that. I had a header which was OK. But it was disappointing. The state of the pitch was ludicrous. It was pure stubbornness from the ref to let it go on. It felt almost pre-meditated to make us go on. I felt the wrong decision was made.

“For their goal, the ball got stuck in a puddle and they took it on and scored. It was frustrating.”

Robinson, like his boss, was in the Millwall side which was 1-0 up at Northampton on New Year’s Day 2007 when it was stopped with little more than 20 minutes to go. “That pitch was nowhere near as bad,” said Robinson. Northampton ended up winning the reply 3-0.