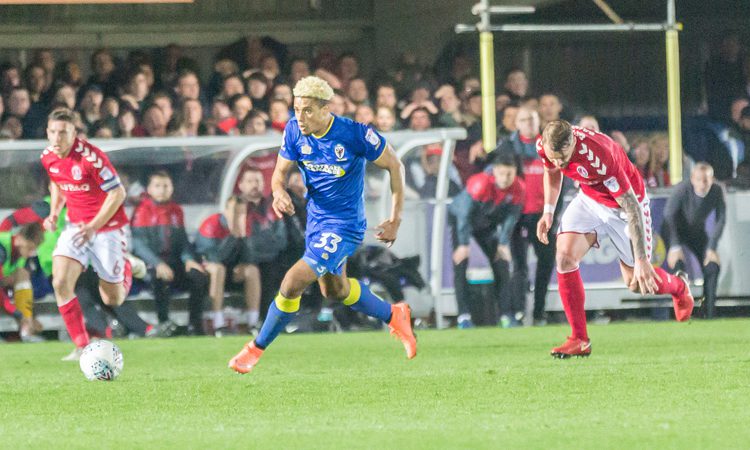 By Richard Cawley at the Cherry Red Records Stadium

Lyle Taylor will surely be playing Championship football next season – but the jury is firmly out on whether Charlton Athletic will be able to say the same.

AFC Wimbledon’s matchwinner on Tuesday night had already told this paper recently that he will not be able to reject an opportunity to play in English football’s second tier, a situation which had already played out last summer when Tom Elliott left for Millwall.

The Dons rejected January interest in Taylor but will be powerless to stop yet another prized forward moving on at the end of June, when his contract expires.

But holding onto their totemic frontman rather than accepting a fee in the winter will prove sound business acumen if he scores the goals that keep them in League One.

And in midweek Taylor was the difference as he dented the play-off hopes of an Addicks side who were one of the clubs interested in acquiring him at the turn of the year.

Okay, it was something of a gift goal, Patrick Bauer’s loss of balance handing Taylor the opportunity to romp through on Ben Amos’ goal – but he still had to finish. And he did exactly that, threading the ball through the legs of the on-loan Bolton Wanderers keeper to hand Neal Ardley’s side a lead just moments before the half-time whistle.

It was his 17th of the season and 13th in the league, meaning he has accounted for 33 per cent of Wimbledon’s goals this season. You can see why it would have been madness for chief executive Erik Samuelson and manager Neal Ardley to countenance doing business when the approaches came in.

But Taylor’s performance was so much more than just about finishing in the South London derby.

Taylor wasn’t quite able to bully the Charlton centre-backs like he did in December’s 3-1 FA Cup victory at the same venue, walking off that day with a brace, but that didn’t mean he gave Bauer or Jason Pearce an easy ride.

While he wasn’t able to win much aerially, his hold-up play was on the money and he tracked back when needed to help with a resilient Dons defensive display. Even late in the contest he produced a sliding tackle on Ezri Konsa to regain possession.

Wimbledon deserved maximum points. They played like the side who wanted them more and managed to blunt any kind of attacking threat from their opponents.

There was plenty of food for thought for Lee Bowyer as he suffered the first defeat since taking the job on a caretaker capacity.

His front pairing of Stephy Mavididi and Michal Zyro failed to gel at all with the latter not displaying appetite for the battles and 50-50 situations that regularly cropped up. The Wolves man pulled out of at least one challenge and there were also a few occasions where he failed to move into anywhere near top gear when chasing the ball.

One fall to the turf that would have befitted the floor mat at the Commonwealth Games gymnastics drew derision from the home crowd, especially when you had Taylor down the other end throwing himself around with gusto.

Jake Forster-Caskey was given no time to dictate from the base of Charlton’s midfield diamond.

The Addicks were horribly ineffectual with the ball and did not manage a shot on target. The closest they came was Pearce’s header which came off the left post, Liam Trotter appearing to get the slightest of nicks on it.

Apart from that Charlton contrived to waste some useful free-kicks around the edge of the Wimbledon penalty area as well as sending shots harmlessly wide.

It was Wimbledon who produced the notable opportunities in a typically tight derby encounter.

Konsa just reached the ball before Taylor when Amos blocked Harry Forrester’s early break into the box while Trotter’s dipping right-footed volley was not far away in the first half.

It needed Lewis Page to make a last-ditch sliding tackle on Forrester soon after the break.

Bowyer brought on Josh Magennis and Nicky Ajose but it did nothing to lift Charlton’s attack level beyond the ponderous. Wimbledon got men behind the ball and defended as if their lives depended on it. It wasn’t always pretty – but it didn’t need to be. It was certainly effective.

Amazingly Ardley has had his critics this season amongst the Dons fanbase – perhaps a victim of over-achieving in their first campaign at League One level – but he certainly got his tactics right on Tuesday. They smothered the Addicks’ attempts to work and even coped with the loss of Will Nightingale midway through the first half due to injury.

Their run-in is not an unkind one on paper. Take out the trip to League One leaders Wigan and they face teams that are 16th or below. The home games against Bury and Oldham stick out in terms of magnitude, especially without that winning feeling on the road since dismantling Bradford City at the end of January.

If they can keep producing the work-rate they showed in midweek, they should get the job done. It goes without saying that Taylor, so often the man for the big occasion, will need to once again step to the fore.

The looming headache of Taylor’s future is one to worry about once their league status is determined.

But having struggled to replace Elliott, they could soon have the unpalatable challenge of trying to cope with losing another proven performer at this level.

In Charlton’s case, all eyes will be on how they recover from a first setback on Bowyer’s watch.

He rightly pointed out that Charlton still have their play-off hopes in their own hands – which wasn’t the case when he replaced Karl Robinson – but their last leg of the season is anything but simple.

Tomorrow’s home game against Scunthorpe United is followed by testing away trips to Shrewsbury Town, so dominant when they won in SE7, and a Portsmouth side who also covet one of those top-six spots. After that? Blackburn at home. Gulp. If they do make it then they will do it the hard way.