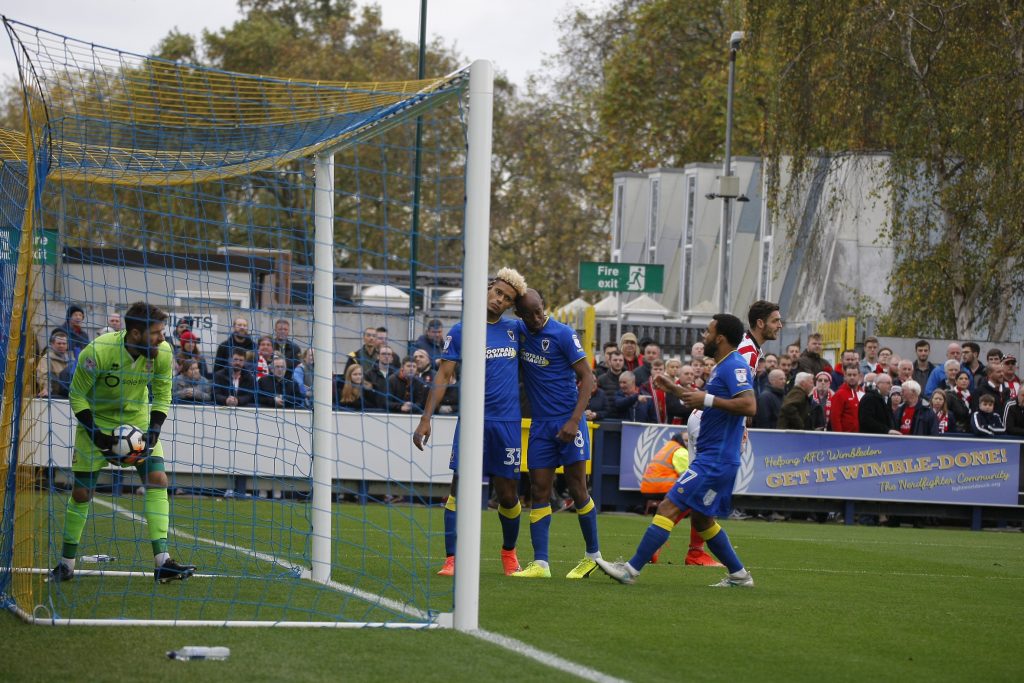 By Laurence Lowne at the Cherry Red Records Stadium

Lyle Taylor kept his celebrations to a minimum as he bagged the winning goal to take AFC Wimbledon into the FA Cup second round.

Lincoln’s joint management team of Danny and Nicky Cowley played a crucial role in helping Taylor fall in love with football again, when he turned out for them at Concord Rangers following his release by Millwall in 2009.

The Dons matchwinner’s respect for them was evident, with the celebration following his fine goal subdued by usual standards. Post-match – between posing for pictures and signing autographs – Taylor was in deep conversation with them.

It was a poor defensive pass that saw Wimbledon take the lead in the seventh minute as Taylor latched onto the free ball and dispatched a rasping shot beyond the despairing dive of Josh Vickers.

The Dons limited an adventurous Lincoln team to few chances.

The early pressing that saw Lincoln lose the ball and concede settled any nerves.

Taylor collected the ball, steadied himself and shot home on the angle of the six yard box.

In the next 20 minutes he was roughhoused by Lincoln and got zero protection from the referee and had to be withdrawn injured in the 29th minute. Referee Andy Woolmer was so far from play at times, it was extraordinary that he got many key decisions correct.

Harry Forrester was also on the end of some crude challenges.

Woolmer did let the game flow as he did not issue a single yellow card.

Darius Charles in defence was imperious for the Dons. Jimmy Abdou patrolled in front of the back four and put in an immense shift.

Barry Fuller found time to support attacks while Tom Soares harried across midfield and his persistence often allowed Forrester to run with the ball and pull Lincoln apart.

The on-loan Rangers man was willing to take on players and on another day could have set Taylor and Cody McDonald free to score.

Two chances either side of half-time were key.

capitalise but he lost his footing.

Lincoln put increasing pressure on the Dons backline but Long caught or punched clear while Kennedy cleared one shot which took a late deflection. His quick reactions were crucial.

On many occasions Lincoln could not get into the box because Darius Charles read the game so well, largely restricting them to long-range efforts. Ollie Palmer’s shot was palmed around the post by Long.

The late introduction of the experienced Paul Robinson helped the Dons ride out the late storm of pressure.