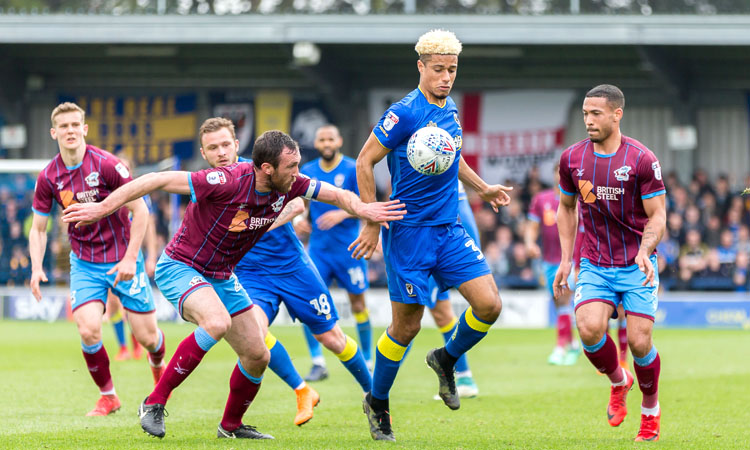 By Laurence Lowne at The Cherry Red Records Stadium

AFC Wimbledon chief executive Erik Samuelson and manager Neal Ardley had encouraged supporters to be in positive mood as the club’s survival hopes go under the microscope – and the players used those feel-good vibes to take the lead after four minutes.

Dean Parrett’s corner was only half-cleared and the ball found its way to Harry Forrester, who pinged in a delightful cross for homegrown youth product Will Nightingale to head home at the near post.

Soon after Forrester beat his player on the edge of the box and smacked a shot against the bar.

Parrett got back in the act with a run from deep, and saw his effort whistle past the post with the visiting keeper beaten.

Next up was Tom Soares, who rattled in a shot that was just too high.

For 20 minutes it was all Wimbledon, even finding time for a goal to be disallowed for offside. There was much to admire, which included Lyle Taylor being busy and creating space for others with runs and forays.

With a single goal lead and a host of chances scorned, there was a nagging doubt that such a slender advantage would not secure all three points and there were warning signs late in the first half that despite a nine game run without a win, Scunthorpe could still pose a threat. Both Duane Holmes and Ivan Toney made runs that were dealt with by Nightingale and his centre-back partner Deji Oshilaja, while George Long made a string of clean catches in the dry conditions from numerous crosses.

The second-half was a different matter and perhaps supporters had not realised the strength of the wind, but Scunthorpe were encamped in the home half gaining and retaining possession for long periods.

They secured a corner within seconds of the restart, and were soon flinging more players forward in support of Holmes and Toney. Both Neal Bishop and Jordan Clarke looked lively and keen to put in shots which were blocked and well-saved respectively.

It took former Charlton striker Lee Novak to secure the equaliser. Holmes skipped down the Dons right, with Fuller left upfield, and his cross found Novak, who dispatched from close range.

With both the injured Parrett and tired Forrester now subbed, the planned for introduction of George Francomb to help secure the points was soon changed to Lloyd Sam making his debut in place of the exhausted Egli Kaja.

When Taylor was upended on the edge of the penalty box, it fell to Sam to make himself an instant hero. On this occasion it was not to be.

But it was a spirited performance from Wimbledon, even if many may see it as a missed opportunity to secure three points.