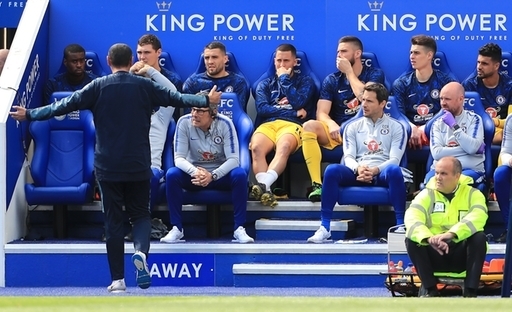 BY PAUL LAGAN at the KING POWER STADIUM

Chelsea completed a dull as dishwater final Premier League game of the season with a 0-0 draw at Leicester City’s King Power Stadium this afternoon.

The point is significant in that it means the Blues will finish third in the league ahead of much-lauded Spurs but miles behind Liverpool and Manchester City.

Chelsea’s final league standing will probably be greeted as a greater achievement than Liverpool finishing second, but the Chelsea faithful will be loving it that they regained their status as the top London side.

Chelsea’s next game is a little matter of a Europa League final at the end of the month in Baku where they will face Arsenal.

No player wanted to get injured in the match, but the fact that Gary Cahill did not even travel with the players means that his seven-year career at Stamford Bridge will end with a whimper.  He could not even get on then pitch as a substitute on Thursday night when centre-back Andreas Christensen limped off. He was also absent he following night’s annual awards ceremony where the  club planned a video tribute.

Ross Barkley should have opened the scoring on three minutes, when he latched onto a wonderful defence-splitter from Jorginho. The former Everton midfielder plucked the ball out of the air and let fly with a venomous left-footer from close-range but goalkeeper Kasper Schmeichel  blocked the ball with his face.

Ruben Loftus-Cheek was a tad unlucky to head over the crossbar from a Pedro, right-wing cross, as the visitors looked to start the game with a bang.

leicester recovered their composure and started to dominate possession as the Blues went into their shell – content to allow the Foxes to control the match.

Jamie Vardy was unlucky with a header on 31 minutes – Willy Caballero easily grasped then glancing effort into his chest.

A comedy of errors, bu Cesar Azpilicueta and David Luiz occurred on 43 minutes, both fell to the ground, having slipped allowing Vardy to race clear. But the striker opted to pass rather than shoot on goal, failing on both occasions.

The fist effort of the reset fell to Youri Tielemans, whose long-range half-volley curled wide of Caballero’s right post.