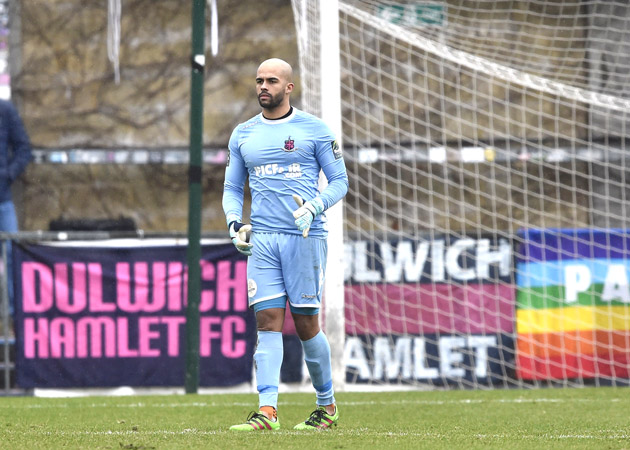 Dulwich Hamlet goalkeeper Preston Edwards has revealed what he said within earshot of Met Police striker Lloyd Macklin – moments before saving a penalty from the Blues striker for the second time this season.

Edwards admitted his defence looked nervy at times as the visitors recovered from being pinned back in the early stages to bombard the hosts’ area after Dulwich lost midfielder Kenny Beaney in the 51st minute, red-carded for keeping out an Olli Robinson shot with his arm in the incident which led to the spot-kick.

“I just said to the ref ‘is he allowed to take the penalty because he missed one against me earlier in the season’,” said the former Millwall man after his spot-kick heroics helped 10-man Dulwich earn a goalless draw at Champion Hill on Saturday.

“It was just a few mind games. He’s missed the penalty, so that’s two out of two against him.

“We were alright in the first half, they gave us respect in terms of playing out from the back,” said the Hamlet keeper. “Obviously when you go down to 10 men it’s very difficult to play from the back and build on from there. It was difficult in the second half but we were on a run of three defeats, so the confidence is not as high as it should be.

“They were very aggressive with their approach, they hit a lot of crosses into the box, more than we’ve had in any game before here [this season], so I’ve got to give them that respect, and it’s difficult to defend against so many crosses.

“We might have been a little bit nervy but we kept a clean sheet.”

Edwards was in no doubt about the importance of tomorrow’s Bostik League Premier Division trip to Lowestoft Town after Hamlet picked up just one point from their last four league matches.

“We need three points,” added the goalkeeper. “The chasing pack are coming up against us. It will be hard to catch [league leaders] Billericay so we’ve got to make sure we secure second place.”