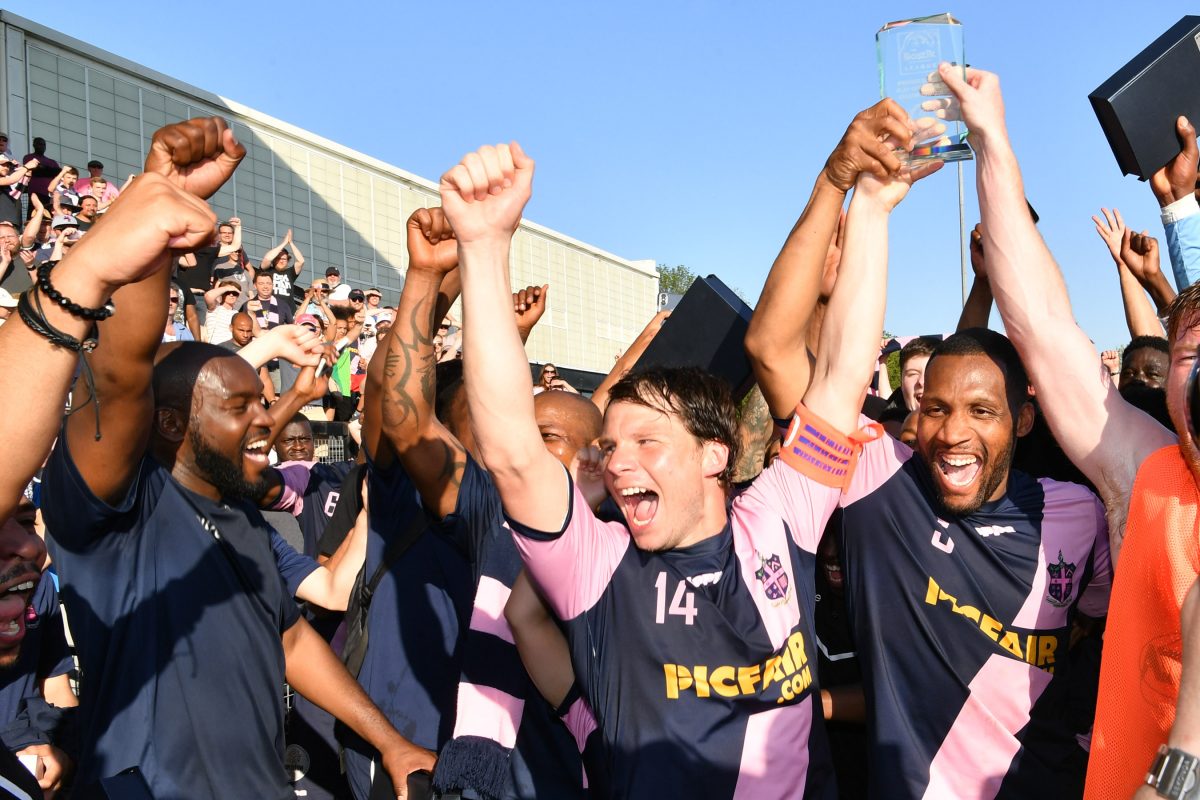 Dulwich Hamlet boss Gavin Rose started planning for life in the National League South the morning after their dramatic play-off penalty shootout victory – but admits where they will call home will significantly affect their budget.

The South London club were forced to move out of Champion Hill at the start of March as they were caught in the crossfire of a dispute between Meadow Residential, who own the ground, and Southwark Council.

It saw Hamlet switch their base to Tooting & Mitcham’s KNK Stadium. A huge crowd of 3,321 were in attendance on Monday to see them beat Hendon 4-3 to win promotion out of the Isthmian Premier Division.

“The first thing we need to determine is where we will be playing – at the moment it will still be Tooting,” said Rose. “But that may well change, and that changes the dynamic and what the budget will be as well.

“We are working backwards to go forwards. Once we know our budget then we will know which players we can retain, what ones we unfortunately can’t and what we can add.

“If we were still in Dulwich we would be able to put out a budget which is at a respectable level for where we are now – the Conference South. If we are not there then our hand is forced a little bit more – the budget probably wouldn’t be as competitive as we’d like it to be.

“We know that the council are in negotiation with Meadow regarding the sale of the land [at Champion Hill]. I’m not sure how far down the line it is.

“The main thing is us knowing where we are going to be playing. I don’t think it will be too long before we get clarity. If it is Tooting we have been told we can get investment in, which wasn’t an option six months ago. That can change things in a positive sense.

“We know what our minimum budget will be, but it would be a lot clearer if we are in Dulwich and get investment – in terms of building a long-term plan for the club.”

Hamlet’s plan is to bring in income from a new share issue, provided the existing shareholders agree to it.

“Going up a league does make us more attractive, even just from a marketing angle, and we are quite well-supported,” said Rose. “I don’t think the club want to go with one investor that you rely on – it would be a stakeholder type of thing, three or four stakeholders.”

Gavin Tomlin’s 54th-minute equaliser took the contest into extra-time and substitute Dipo Akinyemi converted the penalty which sent Hamlet up.

Rose admits that Dulwich’s struggles against their landlord earlier in the campaign had made the promotion his sweetest yet. He initially took charge of Hamlet in the Isthmian League First Division South and they have been almost perennial play-off challengers.

“It has been well-documented what has been happening at the club and the players will have felt that mentally for a good six months,” he said. “They have stayed focused for so long. There have been some really good performances and sustained good form throughout.

“It gives us that little more satisfaction. But also off the pitch, everyone has stuck together and that is probably more significant. The win just put the icing on the cake for the solidarity which has been shown for the club.”

Rose has plenty of control over the running of Hamlet, but says his input above team affairs is more of an “unspoken” agreement.

“There is a lot of trust on both sides,” he said. “But if I lost six games in a row I could still get the sack, that hasn’t really changed. And, in a sense, I wouldn’t want it to.

“It helps you as a manager, knowing you are not secure or comfortable. It keeps you on your toes. I wouldn’t want to feel untouchable – that is not good for me or for the club.”

Rose knows there are some tough calls ahead as he decides on which of his Dulwich squad to move on.

“If I’m able to add players I will probably need to lose players if I have a similar sort of budget to what we have now,” he said. “This group of players have shown loyalty and consistency over a long season and it is quite difficult as a manager – even just as a man – to start thinking about one or two not staying on.

“You do become attached to them and have a lot of sentiment for them. It is hard but I suppose it happens every year. It is harder though after achieving something with this group.”

One player that Rose expects to lose is Reise Allassani. The former Crystal Palace attacker had serious interest in January but committed his future until the summer.

“I think he will go,” said the Dulwich chief. “Don’t get me wrong, if he is still available to us then I would take him all day long.

“The second part of his season was dogged by injuries a little bit but his performances were still good. And moving to Tooting meant our game changed a little bit – their pitch isn’t as free-flowing as at Dulwich. It did affect his game.

“But even on Monday his play looked a cut above at times. I expect him to push on.

“We half took a risk, because we were offered really terrible money by a few League One clubs but decided because he is an asset that we’d accept if he went at the end of the season. It worked for us.

“We’ve got promoted and if he goes for a smaller fee then as a club we will not stand in his way because he has done well for us.”