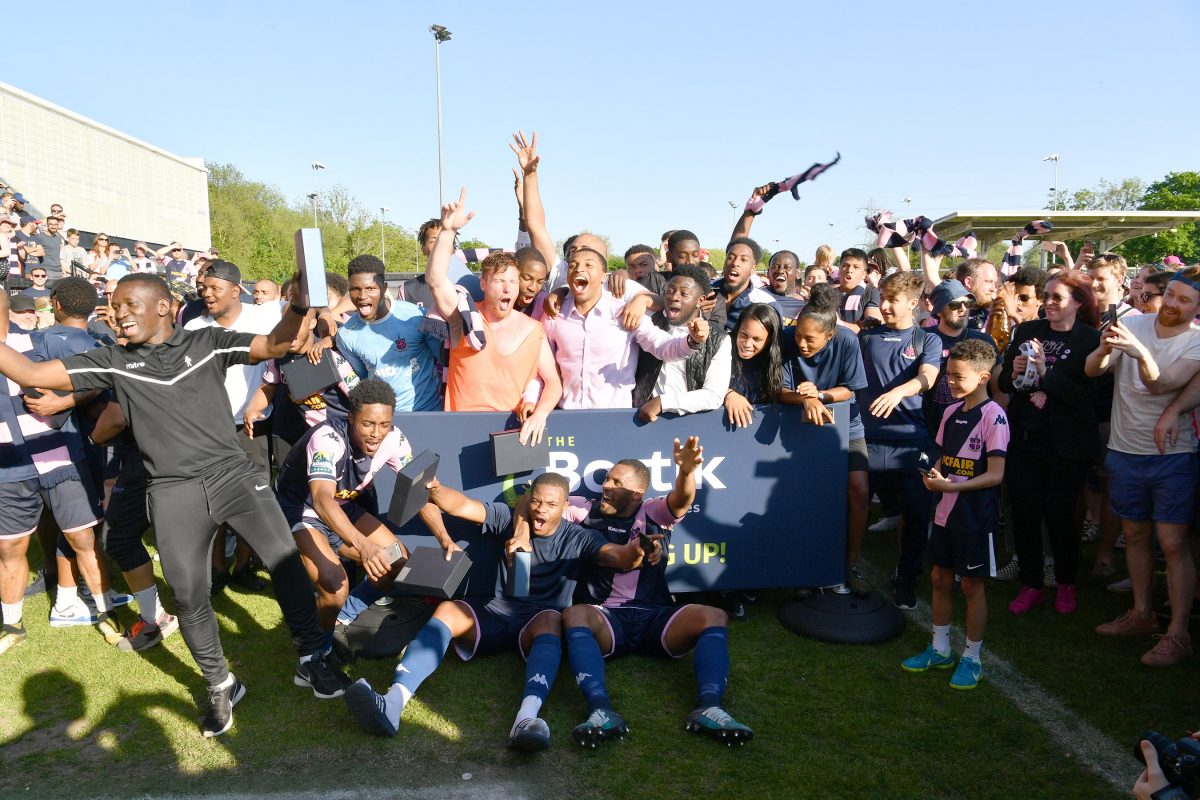 One of non-league’s fastest growing clubs is set to return to its home of more than 115 years as soon as its home game against Torquay United on December 1.
The club, Southwark council and its landlord Meadow Residential have agreed on the return, after the developers locked them out in March.
Gavin Rose’s side have been playing their home games seven miles down the A24 at Tooting & Mitcham’s Imperial Fields – but won promotion to the National League South in a dramatic penalty shootout in May, pictured.
A statement issued by all parties following a meeting with sports minister Tracey Crouch, set up by local MPs Harriet Harman and Helen Hayes, said: “An agreement has been reached after the conclusion of successful talks between Dulwich Hamlet Football Club, Southwark Council and Meadow Partners that will see the club return to Champion Hill.”
Supporters’ Trust Co-Chair Duncan Chapman said “The club and the trust have been working as one on this and are both delighted that Dulwich Hamlet will be coming home to where, over many years, it has grown to become such an important part of our local community.”
With crowds regularly exceeding 2,000 people the return to Champion Hill will also be a welcome boost to many local businesses on match days. The final agreement was reached following a meeting attended by all parties chaired by Sports Minister Tracey Crouch.
Club Director Ben Clasper said: “We’d like to thank Tracey Crouch and our local MPs Helen Hayes and Harriet Harman for facilitating and attending the meeting which led to this positive outcome.”
A joint statement was prepared and agreed between all parties following the meeting at the Department for Digital, Culture, Media and Sport said: “DHFC has approached Southwark council to ask for support to secure the long term financial security of the club and facilitate its return to Champion Hill.
DHFC has requested a new lease from the council on the AstroTurf pitch.
“This new lease, to be granted by the Council, would be coterminous with an 18-month lease, to be granted to DHFC by Meadow, on the Champion Hill site. Both leases include a one-year rolling extension.
“The new lease of Greendale would allow DHFC to use the AstroTurf pitch for all its sporting requirements including any match day use and such other community and sporting uses as DHFC may undertake from time to time.
“DHFC has agreed to meet the council’s aspiration for investment into the improved sporting facilities on that site for the benefit of both the club and the wider community.
“Meadow has agreed to support the club’s return to Champion Hill on this basis. In recognition of this, the council has agreed not to progress activity on a compulsory purchase order in relation to the Champion Hill site for the duration of DHFC’s lease at Champion Hill, so long as it is on fair and reasonable terms, including allowing the club to retain match day income, bar-takings and catering proceeds.”