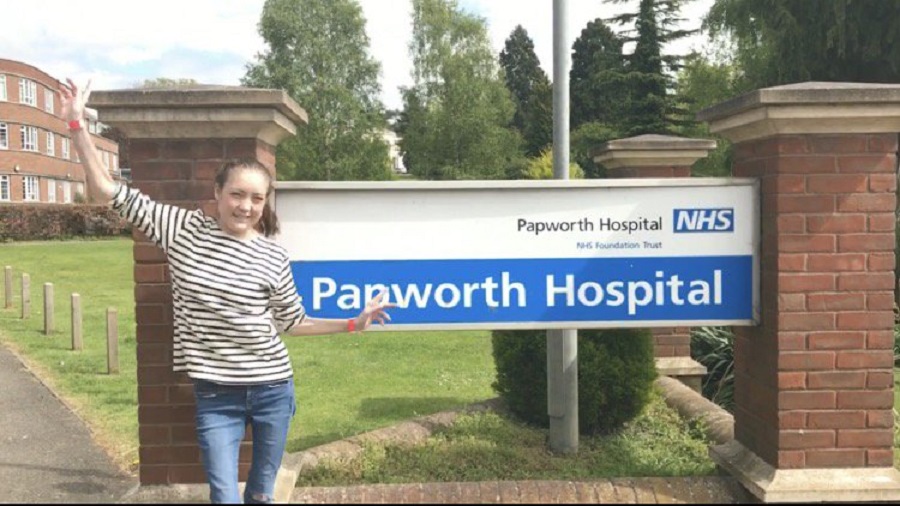 Ordinary grub we eat every day could kill Pippa Kent.

And there are many thousands like the double lung transplant patient, so she has written a cookbook which leaves out all the danger foods.

The cystic fibrosis survivor from Battersea, though, is running out of time to get the £50,000 needed for her crowdfunding campaign to publish it.

The 28-year-old, who had her life-saving operation last year, has dangerous dietary no-go areas as a result of her immune suppressant medicine – and knows there are many others out there in the same bind.

But if she does not find the cash by Sunday – which is also her birthday – the book project, featuring famous chefs and food chains, will have to fold.

So she has issued a last-ditch appeal to well-wishers and companies who might be able to fund the project.

The recipes in Now What Can I Eat are tailored for people who have had an organ transplant, undergone chemotherapy, or have illnesses such as Crohn’s disease and arthritis or auto-immune diseases.

Pippa, who works for the Department for Education, began crowdfunding on March 30, almost a year since she had the transplant on April 14, 2017.

She said: “If we do not reach the target, the £26,000 already raised will be lost, as well as the opportunity to use the support from the Papworth Hospital dietician team and the 100 chefs/restaurants and foodies who had offered to donate recipes and their time for free.

“This project would help many thousands of people and is supported by charities, hospitals and individuals, but we are running out of time.

“These people are often going through tough times, they have a lot on their (metaphorical) plates already yet they also have to watch everything they eat; no rare meat, runny eggs, blue cheese, unpasteurised products, deli counter purchases to name just a few examples, as well as having to follow a strict list of instructions, often for the rest of their lives, or risk huge consequences.

“It’s these people I am trying to help with the creation of Now What Can I Eat? The Cookbook. I know what it’s like, I’m one of them.

“Last year my life was saved thanks to a double lung transplant and the gift of life from a donor I didn’t know. I am and will be forever grateful to that person and their family and want to do something positive to mark the journey I have been on, as a tribute for my second chance and as a way of giving back, through charitable donation, to the people and organisations that saved my life.

“I have an expert team of dieticians on board from Papworth Hospital, a publisher working pro bono as well as over 100 recipes contributed by famous chefs, restaurants and well-­known foodies.

“I also have hundreds of people who have engaged already and said how helpful and beneficial the book would be to them, but in the cruel light of day what I really need is money.

“I need someone to commit to the idea financially in the same way as I have emotionally.

“Invest some money behind it and make the campaign more than an idea. Make it a cookbook which can start helping people for which outside of the medical lists and texts at present no resource exist.

“I know businesses do not have thousands, of even hundreds, of pounds to spare. I am making an appeal for every business, or individual businessman or woman, to consider if they may be able to support this cause and help us make it a reality before it is too late.

“If the answer is yes I urge you please to get in touch. Without you this book will not happen. The idea will not progress and the resource will remain unavailable, but with your support we could make such a huge impact on so many lives.”

Pippa was diagnosed with cystic fibrosis aged two, but medication suppressed the symptoms.

Then as she grew older, even intravenous drugs had less effect, so she and went on the transplant list in November 2016 – which meant only an anonymous dead donor could save her illness from slowly killing her.

“The cookbook has been a huge part of my recovery,” she said. “I wanted to do something worthwhile, to ensure that I made the most of my second chance and the ultimate gift given to me by my donor.

“I hope, in the creation of the book, that I will be able to help many more people by making eating, something almost everyone takes for granted, one less thing to worry about when immune suppressed.”

After surgery, she was shocked to be presented with a food list by a dietician at the hospital. She had to cut out rare meat, blue cheese and eggs.

She emailed contacts from her past in public relations in the food industry and received backing from chefs such as Gizzie Erskine, Paul Ainsworth, Tony Banks and restaurants including Leon, Burger and Lobster, Honey and Co, and well known foodies Tess Ward, Alice Living and Lili Villi.

A percentage of the profits from the book, published by Relish, will be donated to the Brompton Hospital, South Kensington and Papworth Hospital, Cambridgeshire.