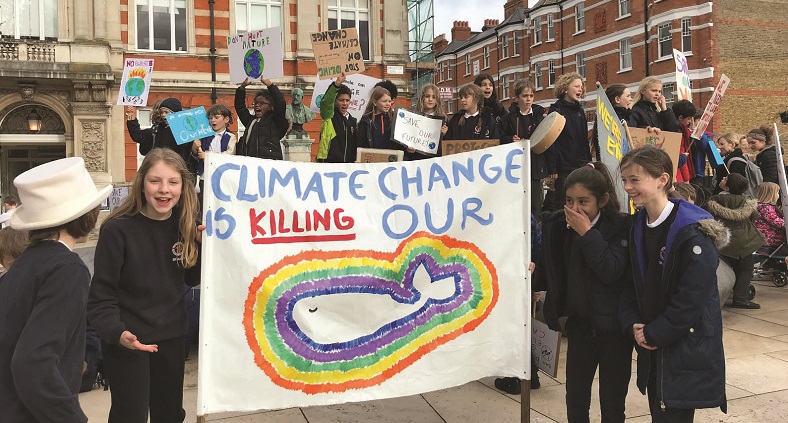 Schoolchildren and their parents took to the streets last Friday to make a stand against climate change, calling on the council to take more action to protect their futures, writes Izzy Wightman.

The campaigners from across South London descended on Windrush Square in Brixton on a day of protests across the world which aimed to persuade governments to make it a priority to set out plans for tackling climate change.

The Lambeth protest comes after Lambeth council declared a climate emergency in January because they believe central government is not doing enough to tackle global warming.

Django Pettifor-Carey, 10 and from Dulwich, was campaigning with his family, including mum Tara Carey who is an organiser behind campaign group Lambeth for a Cool Planet.

Django said: “Adults have failed so it’s our time now and we want to make a change.” Another school pupil, Rosie Mackenzie, said: “My generation is the one getting affected by climate change the most but we’re not the ones who caused it to happen.”

The children gathered for nearly two hours, waving placards and chanting “What do we want? Climate justice. When do we want it? Now,” and “Listen to me, there’s no Planet B.”

They were joined by their families, including Django’s grandmother, political economist, public speaker and co-author of the Green New Deal, Ann Pettifor.

She said: “These are times where the children have to lead so the leaders can follow. “I’m hoping we can get over our Brexit nervous breakdown and start thinking about this as a serious threat.

“Children seem to be the ones who can break through the delusion and shroud that surrounds us.”

MP for Dulwich and West Norwood, Helen Hayes, offered encouragement to the children. She said: “You should all be really proud of yourselves. It is an important message and never feel that you can’t make a difference.

The protest was organised by Lambeth for a Cool Planet, which is calling on the council to urgently work with residents to make a plan for the borough to be carbon neutral by 2030.

They also want the council to let all residents know by the end of April about its declaration of a climate emergency and why it has been declared.

In January, the council said the response from central government – which aims to cut carbon emissions by 80 per cent by 2050 – was not urgent enough, and became one of only two London boroughs – the other is Lewisham – to declare a climate emergency.

The council felt the consequences of global temperatures rising above 1.5C will be so severe that preventing it must be a top priority to prevent it from happening.