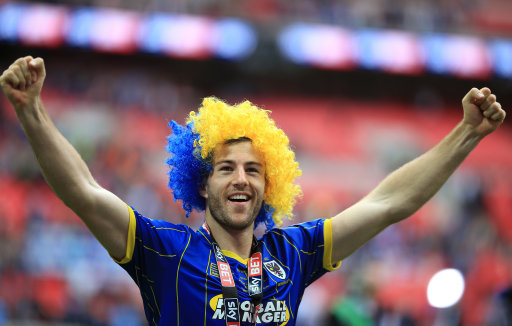 Dons winger Andy Barcham admitted he could not hold back the tears when left-back Jonathan Meades announced his retirement two days before the start of the season.

The 26-year-old faced further surgery on a persistent ankle injury, which caused him constant pain, if he wanted to carry on but decided instead to hang up his boots.

Barcham said: “It was horrible to hear. He texted me before announcing it and started the message with ‘I hope you are sitting down’ so I knew it was not going to be good.

“He had thought about it for a while. I knew he had been struggling. It got to the stage where it was too painful to continue.

“My first thought was how he must have continued to play through the pain and yet still put in such a high level of performance. That shows the character and the ability he possesses. It went under so many people’s radar.

“It was weird going out there at Fleetwood without him because it has been me and him down the left for so long.

“There were a few tears when he came in to say goodbye – which wasn’t ideal preparation for the Fleetwood game but it could not be helped. It was only natural that I should feel emotional. Anyone would be the same. I had to go out and compose myself.

“We are already arranging a get-together of the promoted side but for the time being, not having him around is not nice.

“He was certainly in our thoughts when we went out to play, and in the huddle – we used him as our inspiration. He will still be a big part of this club.

“We are good friends and have experienced the highs and lows together.

“He is so young for his career to be cut short. Whatever he turns his hand to, it is sure to be a success. In the meantime, he will go away to clear his head and let his ankle recover.